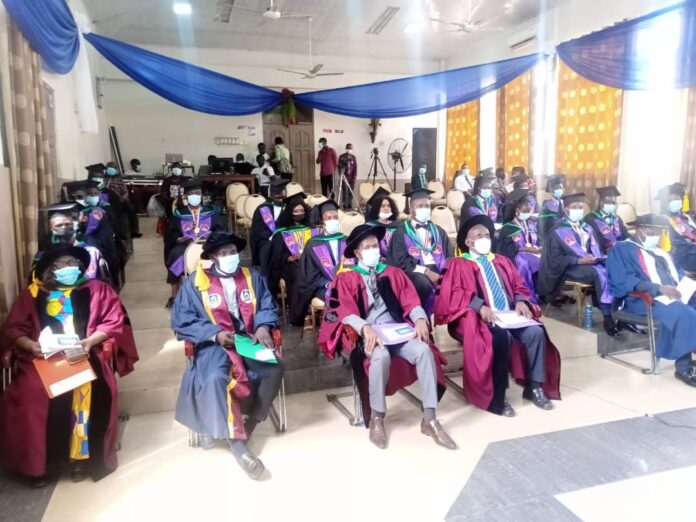 The President of the Christ Apostolic University College (CAUC), Professor Clement Somuah has asked the government to partner with private universities to enable them to roll out entrepreneurial training and programs that would fetch graduates employment after school.

This, he noted would be the best way of curbing unemployment in the country.

Addressing graduands, alumni, and stakeholders of the school at its 6th Congregation which was held largely online with few persons at its auditorium in Kumasi, Professor Somuah said as stakeholders in the development of the nation, tertiary institutions had the responsibility to introduce programs that had ready employment for its graduates.

The CAUC leader said as private institutions provide the entrepreneurial training, it would be useful for government to equip the schools with the requisite capacity in terms of incentives and subsidies to lessen the cost of education at the campuses.

The CAUC President speaking on theme for the occasion, “Our Environment,  Our Future”, described the fight against galamsey as a useful one since the menace has the potential to destroy Ghana’s environment.

He urged the government to be more rigorous in its approach to curbing same.

However, the President noted that the menace would also attract less participants and youth if all efforts were expended by the government to give alternative livelihoods for the people and job opportunities for the youth.

According to him,  many are lured into the illegal activity because they find the trade profitable as it provides support to at least 3million people in the country while the country loses a whopping 2.3 billion dollars to the illegal venture.

CHALLENGES:
The President said the main challenge facing the University College were inadequate finances and infrastructure.

He noted however that the school would continue to solicit support from the Christ Apostolic Church International in completing at least two floors of a new block and a hostel facility for the school.

350 students were graduating at the event with 121 having pursued Diploma courses and 78 completing certificate programs.

A total of 151 students were graduating with degree honors as 42 had completed with Post Graduate Degree awards.