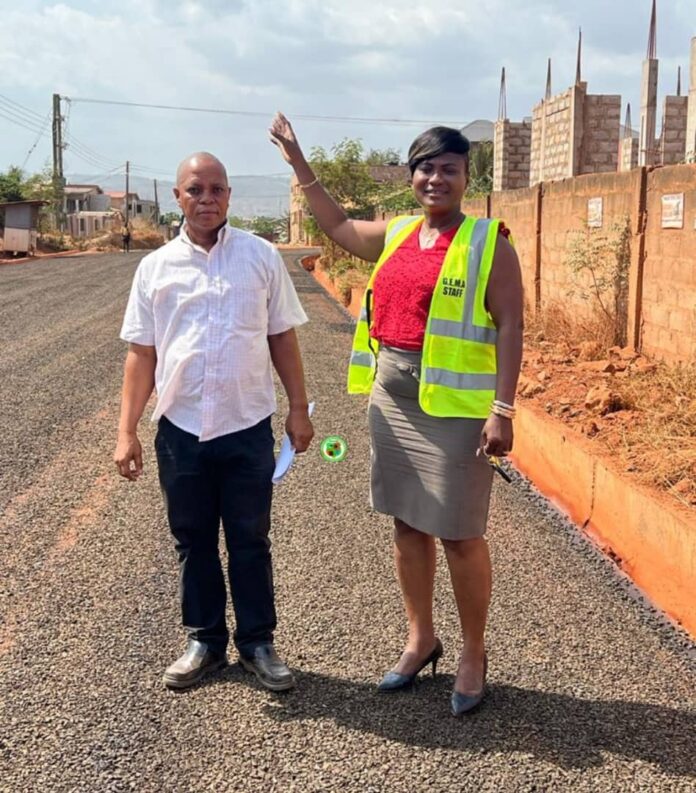 A section of the 3-km stretch of the ongoing construction of the Pantang-Agbogba Cemetery Junction road is being sealed.

The Municipal Chief Executive (MCE), Hon. Elizabeth Kaakie Mann, visited the site on Tuesday, 5th April 2022, to inspect the project while giving assurance of her resolve to see to the completion of existing road projects while initiating new ones.

The Government of Ghana (GoG) funded project being executed by J. O. Nsiah Construction Limited started in 2020 and was expected to be completed within 18 calendar months.

It is one of two projects with a total length of 3km, including drains and pipe culverts, awarded to the same contractor and stretches from Pantang landfill site through Agbogba EP to Cemetery Junction.

Currently, 1.2km of the road has been sealed (prima sealing – first tarring after the earthworks) while the rest is ongoing.

The other component of the project is the rehabilitation of the Wakiki Star Clinic area (Taifa) roads.

Hon. Elizabeth Kaakie Mann, who was accompanied by the Municipal Urban Roads Engineer (MURE), Ceaser Sackey, noted that there are a number of ongoing road projects in the Municipality she inherited from her predecessor and assured the residents of her total commitment to ensuring their completion.

“I believe in continuous policy. The projects that are already ongoing before I took over, I’ll make sure we complete them before we bring in new ones so that we don’t have judgment debts staring at our faces and you know that will also incur some kind of punishment for the Assembly and I wouldn’t want that”, she stated.

“I’m also putting in new ones, that’s my vision for the roads, which I’ve already started”, she added.

The Hon. MCE mentioned Abokobi-Teiman, Abokobi-Boi, and Ashongman Pure Water roads as part of the roads being given priority attention and indicated that the Assembly was making frantic efforts to reshape the deplorable community roads in the Municipality.

“There’s hope! Boi, Teiman, Pure Water, I’m told they have been awarded but the contractors abandoned the site so we have repackaged the whole thing and we’re going to present the documents to the authorities either to bring the contractors back or re-award”, she disclosed.

Touching on the Cosway road, which is part of Pokuase interchange to Ashaiman motorway project, Hon. Kaakie Mann said the Assembly is rigorously pursuing it at the national level and appealed to the authorities to attend to it quickly.

“This is an ongoing project. The first phase which is the Pokuase interchange to the ACP junction is completed. The second phase is the Cosway road (from ACP junction through Kwabenya, Cosway, Ritz Junction, Ashaley Botwe to Ashaiman). I’m pleading with the authorities to come to our aid. Cosway road is very very bad and the constituents are complaining”, she appealed.