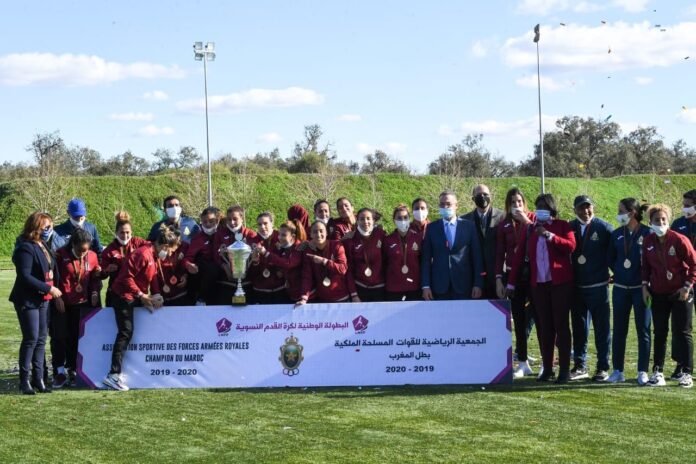 RABAT: Morocco is preparing itself for an imminent boom in women’s football, aiming to have 1,000 licensed female coaches by 2024.

This comes after the recently concluded maiden women’s national championship won by AS FAR Ladies.

Fouzi Lekjaa, president of the Royal Moroccan Football Federation (FRMF), and his National Women’s Football League (LNFF) counterpart, Khadija Ila on Sunday handed over medals and a trophy to AS FAR for winning last season’s campaign.

AS FAR made history when they were crowned the maiden champions of the 2019/2020 season after amassing 66 points.

Following the launch of the women’s league in November 2019, the north African country is now looking to implement a national strategy to triple the number of women and girls playing football.

The objective, according to FRMF and LNFF, is to create 1000 coaches and to have 90 000 active female footballers.

Despite the lengthy pause due to Covid-19 last year, the league was concluded under a bio-bubble environment.

“The 2020/2021 season will mark a turning point in the history of national women’s soccer and the beginning of a new era of professionalism,” the federation said.

“The clubs must have a senior team, an Under 17 team and another Under 15 team to participate in their respective competitions. In addition, it is obligatory to appoint a female as an assistant coach if the head coach is male. The staff of the Under 15 teams must strictly composed of women.”

The objectives laid out on August 6, 2020 between the FRMF, the LNFF and the Regional Leagues, stated that the players of the senior women’s team must all have professional contracts. Those plying their trade in the first division must earn a minimum wage of US$350 while those playing in the second division will earn no less than US$260.

A head coach of a first division side will receive a minimum salary of US$550 while their second division counterparts will earn US$300.

Morocco has made strides in as far as the women’s game is concerned. In March last year, the kingdom organised and hosted the International Women’s Football Cup at the Mohammed VI Complex in Salé. Gabon and Ghana took part in the tournament whose matches were broadcast by national television station, Arryadia.

The aim of the tournament was to give the much-needed international exposure to local women.

Recently, the FRMF appointed two-time UEFA Champions League winner with Olympique Lyonnais, Reynald Pedros, as national women’s coach. He is expected to turn around the fortunes of the Atlas Lionesses.