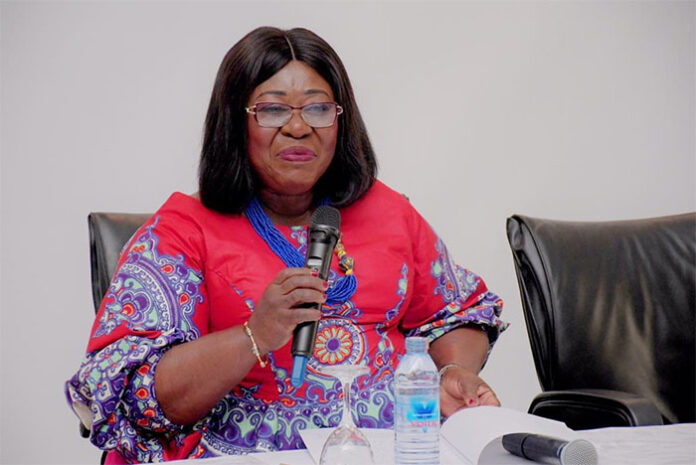 Former Deputy Chief of Staff at the Office of the President, Samuel Abu Jinapor, has extolled the virtues of his former boss, Akosua Frema Osei-Opare, stressing she deserves to retain her position in President Nana Addo Dankwa Akufo-Addo’s second term.

Describing her as a personality who discharges her duties diligently and creditably, Jinapor said Osei-Opare has been formidable in running the president’s office.

Speaking on Asempa FM’s prime time show, Ekosiisen, on Tuesday (12 January 2021), the current MP for Damongo Constituency in the Savannah Region, said Osei-Opare established a good rapport with all appointees of the president and also maintained a cordial working chemistry between the president and the vice-president’s office.

Jinapor added that as the first female Chief of Staff in the history of the Fourth Republic, she kept the busy business of the Office of the President going without recording any scandal, whatsoever, in the first term of the Akufo-Addo administration.

“I worked with the Chief of Staff, Madam Akosua Frema Osei-Opare. I was her deputy for four years and I do know that she is a very diligent woman. She discharged her duties by paying attention to details and her work over the last four years speaks for itself,” Jinapor stated.

“Due to her humility, deep knowledge and understanding of national issues and her working relationship with the president and the vice-president, the last four years of her work as Chief of Staff at the Office of the President has been fruitful and she deserves to remain in office to continue her service. I will be very surprised if President Akufo-Addo doesn’t maintain Honour Akosua Frema Osei-Opare in office,” the first-time lawmaker added.

ALSO READ  UN World Oceans Day: AbibiNsroma Foundation insists "Let's not our greed overcome our needs"
AMA GHANA is not responsible for the reportage or opinions of contributors published on the website.