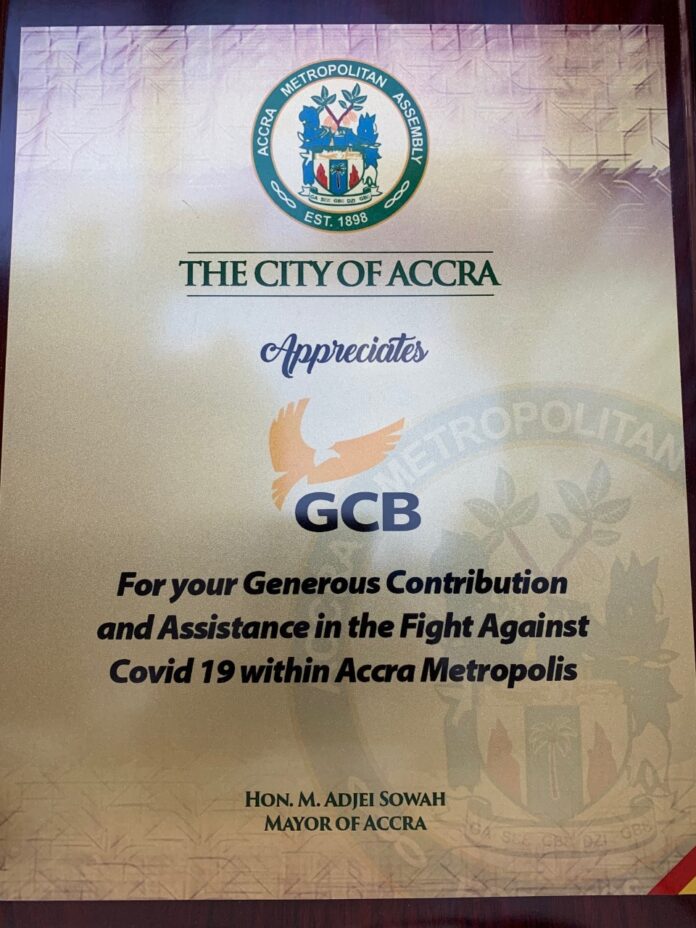 The plaque was presented to GCB Bank at a short ceremony held at the City Hall of the AMA to reward various organizations that partnered with the Assembly at the onset of the pandemic.

Presenting the award to GCB Bank, the Metropolitan Chief Executive of the Assembly, Hon. Nii Adjei Sowah stated that the award was in recognition of the Bank’s generous contribution and assistance in the fight against Covid-19 in the Accra Metropolis.

The plaque was received by Mr. Emmanuel Kojo Kwarteng, Head of Corporate Affairs of GCB together with Nana Yaw Kesse, Communications Manager of the Bank.

In a brief remark, Mr. Kwarteng thanked the AMA for the recognition and stated that as Ghana’s largest indigenous Bank, GCB is strongly focused on directly impacting the society in which operates and as such it would continue to be at the forefront of such initiatives.

Mr. Kwarteng also thanked the shareholders and customers of GCB Bank for their continued loyalty and stated that it is by virtue of their support that GCB Bank is able to make profit and contribute generously to various societal impact causes.

GCB Bank has been instrumental in the Covid-19 fight and it was the first Bank to make a donation of GHS100,000.00 to the COVID-19 National Response Team through the Ministry of Health in Accra. It also donated of veronica buckets and their accessories to the Ministry of Sanitation and Water Resources and the Judiciary, as well as 40 jumbo water storage tanks to the Ministry of Local Government and Rural Development for distribution to markets in Accra, Tema, and other parts of the country amongst other initiatives.

ALSO READ  Ignore NDC Lies; Ghana not ruined under Akufo-Addo---NPP Germany
AMA GHANA is not responsible for the reportage or opinions of contributors published on the website.