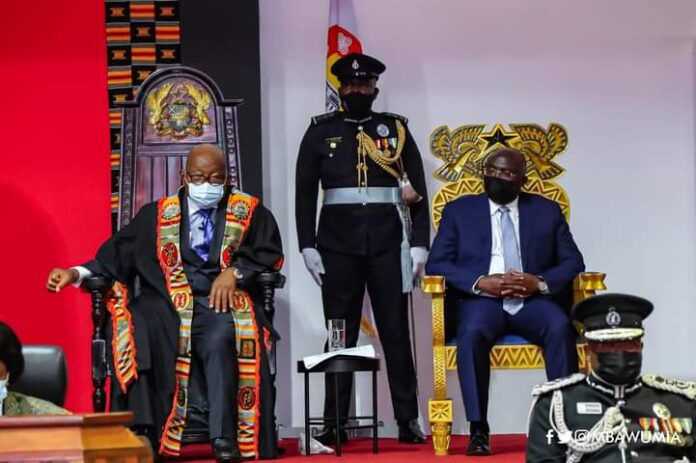 In as much as the government in its first term has chocked some successes there is more to be done to create a system that works for all. The government must redefine its governance, economic, and social structures to trigger system change for prosperity and opportunities for all.

The second term of President Nana Akuffo Addo Dankwah should leave behind a legacy and system that rewards efforts. As Citizens not spectators, we are proposing five (5) ways to make his reign the best to keep everyone moving.

It is important to assess the risks the developing global economies are presenting to national economies including Ghana. From the uncertainties of pricing and impact of politically-oriented export commodities such as cocoa, gold and crude, climate change (natural disasters) and health care are posing new risks to the management of national public finance.

The new health risk such as COVID-19 pandemic has distorted economic activities and put pressure on government financing activities. These risks are enough to guide the government to deduce orderly methods for managing public finance due to budget deficit. It is therefore imperative to strengthen the medium-term fiscal policies to provide reinforcement against future shocks by ensuring the sustainability of health systems and diversification of economic activities. This should include expanding the economy to create more opportunities for job creation and infrastructure development.

Apart from the regular budget read in parliament, the general public should be informed on issues of contingency liabilities and other fiscal activities beyond the budget. This will help prevent irresponsible spending and promote result-centered budgeting. To do this, the government must assess the public demand for information and create a good information template to feed the public for effective fiscal monitoring.

Constitute the right size of government

Putting an end to big government would stop the cumbersome and prickly tax system and borrowing. It will also end the diversion of individual hard-earned income into too many political decisions by giving it to people who lose nothing when funds are administered wrongly.

Big government of over 110 ministers and other uncountable numbers of appointees did not have any measurable impact on the economy. It rather led to wasteful resources of taxpayers contributions. Big government also uses the power to make some people better off at the expense of others. They enjoy privileges, immunity and pass deals to enrich themselves. We, at ILAPI-Ghana also suggest you cap the number of Ministers to 70, without appointing any Regional Minister from Parliament. This, we believe will allow the Regional Ministers much time to administer their duties at their respective Regions.

Ghana being the secretariat for the largest global market in the world thus Africa Continental Free Trade, it is an opportunity to take another look at the structures that create a good business environment. Currently, Ghana rank on World Bank’s Doing Business index has drop from 114th in 2019 to 118th out of 190 countries in the world.

It would be difficult to convince investors if the heart of AfCFTA has structural challenges that militate doing business. With all the e-government structure and digitized facilities that have been embarked on, little work has been done to increase access.

The jamboree of digitization should not end at the launch but continues campaign to get most Ghanaians to understand and use the digitized platforms. Again, cost must be considered as a way to induce access to many digital platforms in Ghana, especially on the mobile money interoperability. It is important to note that Doing Business Report uses simple indicators including Starting a Business, Dealing with construction permits, Getting Electricity, Registering property, paying taxes, Getting Credit, Protecting minority investors, trading across borders, resolving insolvency and labour market regulation.

Therefore, this second term is an opportunity to redefine government functions that facilitate doing business and deepening the liberal traditional principles that promote business growth for all. We cannot continue to live in a country where you need to involve a third-party payment to get simple things like a business certificate, paying taxes, construction permit, driving license and even getting an electric meter. The second term is an opportunity to reform structure and administrative bottlenecks that stifle business growth and reduce unemployment.

ALSO READ  Election 2024: Why NDC must invest in Results Monitoring and Collation than Campaign

The incidents of corruption; perceived or real, made news in your first term of office, the Corruption Perception Index (CPI) for 2019, as released by Transparency International was 41/100 scores. To improve on this score, we, at ILAPI-Ghana, urge that you make corruption investigation reports public in order to improve transparency in the corruption fight.

The Attorney General’s office should be directed to prosecute corruption and corruption-related a case as it is seen doing with political cases. Appointees of the President must be allowed to face the law and not only the usual status quo of sacking. The office of the special prosecutor (OSP) which became a laughing stock in the last weeks of your first term must be resourced: human and material resources, in order to gain the trust and confidence of the public.

ILAPI-Ghana wishes you the very best in your last term as President of the Republic of Ghana.