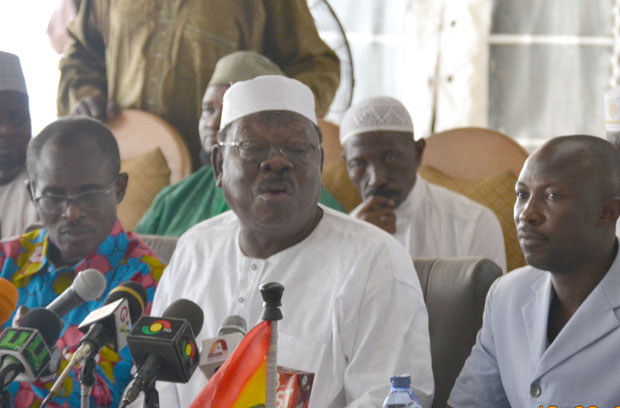 The Ghana Hajj Watch has condemned recent media schemes and agenda continuously waged by AwakenewsRoom website seeking to run down the ever competent leadership of Sheikh IC Quaye, Hajj Board Chairman.

According to the Hajj Watch, the purported calls by some Muslim Clerics as carried by AwakenewsRoom for the removal of Sheikh IC Quaye from the Hajj Board is planted, ill-conceived, mischievous and above all ridiculous.

The Hajj Watch is calling on Ghanaians and the general public to ignore such publications since Sheikh IC Quaye remains the best man to handle all matters relating to the Hajj Pilgrimage for the next four years.

Below is the full statement by Ghana Hajj Watch that throws more light on setting matters right:

It has come to our attention with shock and dismay that a group calling itself ‘Muslim clerics’ is calling for the removal of the best-performed hajj board chairman, Sheikh IC Quaye. And to justify their call and to deceive the unsuspecting public, they peddle untruth that Hon Sheikh I C Quaye fainted during the presidential inauguration and is bedridden as a result of stroke.

This is false. Hon. Sheikh I C Quaye participated actively in the inauguration of the president up to end of the program. No such thing occurred. May Allah forbid! After the presidential inauguration, Sheikh granted interview to many media houses namely; UTV, Metro TV and others.

The next day He attended Juma prayer at Alajo and the following day, Saturday, he was also at Bediako Funeral and visited a sick family member at Tesano to mention but few. It is therefore mischievous and false to say he fainted or is bedridden as result of stroke.

Using age and lies to call for removal of Hon Sheikh I C Quaye from position of Hajj Board chairman will not work. It did not work when same age case was made against Sheikh’s appointment four years ago and his detractors ended laughing at wrong side of their mouth. The record of Sheikh I C Quaye is there for everybody to see.

We have seen various hajj chairmen from Alhaji Salia, Alhj Benne, Alhji Tanko who were young; yet none has managed hajj so smoothly as the Sheikh I C Quaye. It is an open secret known to the so-called Muslim cleric those chairmen rather left colossal debt and many who paid in full for the hajj could not embark on the pilgrimage.

It is only detractors and enemies of progress and in fact enemies of Islam and Muslim who will call for replacement of hon I C. Quaye. For the record Sheikh has proved himself in religion. He recently organized the first-ever Muslim, Christian and Traditional Authorities dialogue. In the just-ended election, Sheikh contributed immensely in winning his constituency, Ayawaso Central and the constituency in which he reside, Ayawaso West Wagon.

Sheikh is a man who delivers result and his achievement is there for everyone to see. If it is a new appointment then these distractors could have been entertained. Unfortunate for them sheikh has managed hajj efficiently these past four years. Ghana is now spared of the spectacle of confusion and troubles of stranded pilgrims. For three years Pilgrims went to hajj and return quietly.