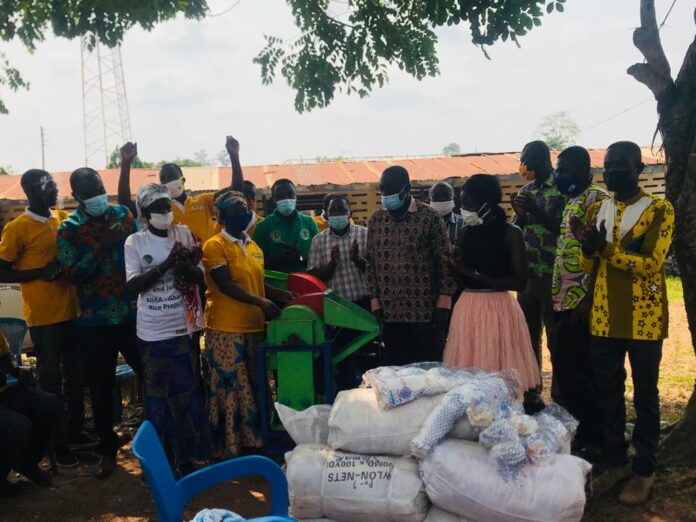 The Atiwa East District Assembly under the leadership of Hon. Lawyer Kwabena Panin Nkansah has donated two threshers and 200 pieces of rice nets to over 300 farmers belonging to 5 Farmer Based Organisations in the rice value chain.

The donation was made in fulfillment of the District Assembly’s commitment towards the promotion of rice production in the district.

The Atiwa East District Chief Executive Hon Lawyer Kwabena Panin Nkansah urged farmers to adopt the use of rice nets. He said that the donation of the rice nets was a measure to reduce the stress in driving away birds manually by farmers. He added that the nets will also help solve the problem of using children to scare birds so they can return to school.

The thresher he said, was a step to reduce post-harvest losses and also encourage more farmers to go into rice farming. He noted that a lot of rice was being lost with the manual threshing and also invited foreign materials like stones in the rice.

Hon. Lawyer Kwabena Panin Nkansah commended the District Director for Agriculture, Mr. Samuel Ofosu for his hard work and commitment to the development of agriculture. He applauded farmers for their support for the vision of the department of agriculture. He promised that as it has been in the past, the assembly is committed to supporting them in any way they can. He advised farmers to continue their hard work to improve their productivity.

The D.C.E explained that the District has begun the process of establishing a multipurpose facility that will provide a ready market for rice produced in the district and other sister districts like Kwahu West, Birim North, Fateakwa South, Atiwa West, Abuakwa North, and Abuakwah South districts. He mentioned that the Atiwa Rice brand that was launched in September 2020 has the potential of a large market and encouraged farmers to grow more to meet the market demand.

The D.C.E appealed to farmers to also use the strength of their numbers in the groups as an advantage to contribute and take initiatives as the government alone may not be able to provide for all their needs. He mentioned that the assembly is still working hard on getting help and partnership to establish a Rice milling house which is one outstanding need of rice production in the district. He acknowledged the problems associated with the milling of rice as farmers travel as far as Kumasi (140km away) to mill rice. He said that he is working on providing an ultra-modern rice milling house in the district.

The Assembly through the District Director of Agriculture, Mr. Samuel Ofosu also donated 20 bags of cement towards the renovation and expansion of the Awosoase Oil Palm Processing Center. This was done to address a challenge he noted during the monitoring of Government flag programs in 2020.

They expressed gratitude to the member of Parliament Hon Abena Osei Asare for her support for Agriculture in the district.

The farmers indicated that never have they seen such development in agriculture and therefore commended the Hon District Chief Executive, Lawyer Kwabena Panin Nkansah for his commitment and dedication to government flagship programs.