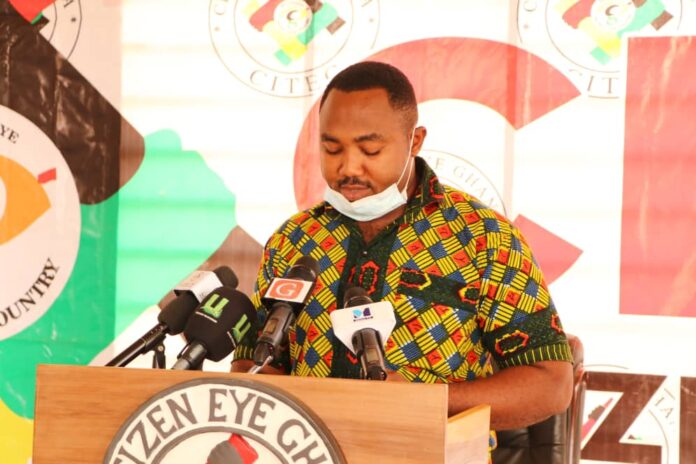 Citizen Eye Ghana (CITEG), a Civil Society Organisation (CSO) which advocates for the correction of democracy deficits, human rights, good governance and demands transparency and accountability of both government and business has condemned the recent news of baby harvesting in the country and called on the government to let justice prevail.

CITEG is very much disappointed by the news reports that some 11 persons including two doctors, four nurses, two mothers, two social welfare officers, and a traditional birth attendant have been arrested for their involvement in “baby harvesting and child trafficking”.

The operation by the security agencies has led to the rescue of two baby boys who were four months old and less than a month old who were being offered for sale at GH¢30,000 and GH¢28,000 respectively to undercover investigators.

Mr. Alexander Kwaku Tetteh, the Founder and Chief Executive Officer of CITEG speaking at a press conference in Accra on Friday, described the act as “Barbaric” and called on Mr. President, Nana Addo Dankwa Akufo Addo and all state institutions responsible for ensuring justice to act accordingly with no fear or favour and ensure that the victims and their families get utmost justice.

“The news came as a shock and we condemn it in all uncertain terms,” he lamented.

According to him, such acts didn’t start yesterday rather have been occurring for long in the country with directing attention to those health facilities engaging in such scandal.

Also, Mr. Tetteh on behalf of CITEG commended the Economic and Organisation Crime Office (EOCO) and the Ghana Medical and Dental Council for their tremendous work which led to the arrest of 11 suspected persons involved in the scandal;

He urged them to extend their operations nationwide and bring more of such dangerous persons to book.

“As a civil society organisation which provides services not provided adequately by government or business, especially to marginalised, disenfranchised or underserved groups, we call on the joint operation team not to relent but take their operations to the health facilities and social welfare department offices across the country and bring those bad nuts to book”, he said.

He also urged mothers and family members who go to hospitals and clinics for deliveries and healthcare with their children to be vigilant.

For his part, the administrator, CITEG, Dr. Isaac Ankomah, called for new systems that will strictly regulate activities of the Department of Social Welfare.

He again called on the government to resource them (Department of Social Welfare) with qualified personnel who put the interest of children first and able to identify gaps and challenges that encourage illegal adoption, sale, and theft of babies.