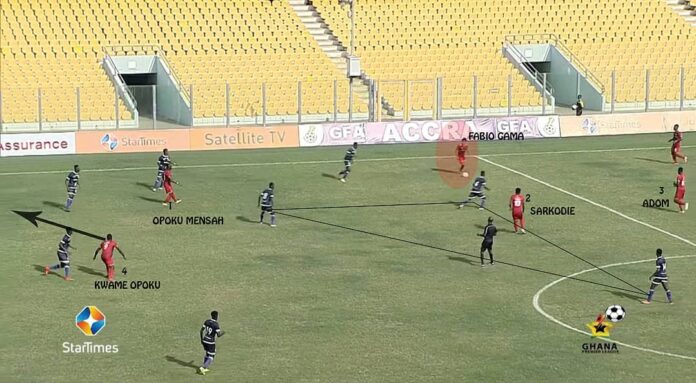 In football, we all enjoy the skills, runs, movement, and space creation and so on but the imperial thing that makes it complete is goals (hitting the back of the net). Indeed, performances (skills, runs, movement, and space creation) are needed but what really matters most for supporters or fans are results (goals).
Usually, strikers or forwards are tasked to bang in the goals even though the rest of the players can score including goalkeepers. In this article, we will look at Asante Kotoko, unequivocally, their attack.
Prior to the commencement of the 2020/21 season, Asante Kotoko had registered eight forwards out of the thirty players not least; the presence of Naby Keita was supposed to be enough to carry Asante Kotoko on his shoulders but much has not been seen so far. Many rated William Opoku Mensah to be next in the pecking order in terms of goal scoring because of his exploits at Karela United and Sporting Kansas City II in the USA but he has not been convincing.
For Emmanuel Gyamfi and Godfred Asiamah, the least said about them, the better. Little did we know that the 21 years old striker Kwame Opoku, formerly of Nkoranza Warriors (first division) will be the man to carry Asante Kotoko on his shoulders so far as the season is concern.
What else can the Technical handlers do if ‘Bayie’ as the fans affectionately call him has produced 66.7% of the goals scored by Kotoko in this season’s GPL, they cannot do anything other than to give him the chance to play. Undoubtedly, he has become a force to reckon with especially to defenders in the GPL.

ALSO READ  Ghana Footvolley Federation and the Department of Health, Physical Education, Recreation and Sports hold a Course on Hydrotherapy

The above image shows some qualities of Kwame Opoku in a game he played against Liberty Professionals on 11th January, 2021 at Accra Spotrs Stadium. We can see Fabio Gama (in red circle) looking to pick a pass. He had four options to choose from. He can choose to pass William Opoku Mensah, who is in the middle of two Liberty players.
He can also choose Emmanuel Sarkodie who is just behind Godfred Atuahene or go for the easiest option that is, pass to Adom Frimpong who is on his left or go for the visionary pass to Kwame Opoku. Fabio can only give the pass to Kwame Opoku only if he moves. Now, you can see that Kwame Opoku has observed the body movement of the defenders and he is on a move into half space to receive the pass.
Fabio Gama finds him (Kwame Opoku) with the long pass but the rest behooves on Kwame Opoku. He then goes one versus one with Paul Kwame in the air. Here, the easiest option that Kwame Opoku can go for is to hold up play and link up with William Opoku Mensah who appears to be running on the right flank so that he (Kwame Opoku) can get into the box and nod in one into the net. But he had a different idea; he blocked Paul Kwame in the air using his aerial prowess and strength and turned him (Paul Kwame) with ease as he attacked the space behind.

As if that was not enough, he outwitted Samuel Amofa and Ahmed Satar with pace and power as they tried to stop him (Kwame Opoku) from scoring. The next image depicts that.

Here comes the most difficult aspect of Kotoko’s game in recent seasons. They find it difficult to plant the ball at the back of the net especially with one versus one with goalkeepers. We have seen countless times where Emmanuel Gyamfi has missed those begging chances; sometimes he hits the ball straight to the goalkeeper thereby deluding the team from desired results.

In the next image, we can see Kwame Opoku in a one versus one with Kofi Baah (Liberty GK) who has already gone down in anticipation for the ball but Kwame Opoku brilliantly lobbed the ball over Kofi Baah into the right corner of the net. He used what we call C-T-T that is, Composure, Timing and Technique in the process. It was not surprising to hear kwame Opoku after the game to have said he watches Lionel Messi’s video a lot.

Furthermore, in the game against WAFA at Sogakope on 17th January, 2021, Kwame Opoku showed his spatial awareness as he linked up with his old team mate from Nkoranza Warriors, Emmanuel Sarkodie for Kotoko’s equalizer. The next image shows Kwame Opoku running pass Ibrahim Abubakar (WAFA Captain) as Emmanuel Sarkodie realizes the pass to him. He slot in with a down shot after his first touch, beating Boliver Owusu in the near post.

These are few examples of what Kwame Opoku has demonstrated with his qualities (positioning, space awareness, movement into space, Composure, timing, aerial prowess, pace and power) which has kept Asante Kotoko in the top four so far this season. Many porcupine warriors’ fans have the conviction that Kwame Opoku will live up to the billing judging from what some previous players with the name Opoku did.

The likes of Opoku Nti, Opoku Afriyie, Opoku Sampene, Prince Adu Poku, Kwadwo Opoku Mahala just to mention few, contributed immensely to the Asante Kotoko during their playing days. Again, if Kwame Opoku is going to be consistent as he has been so far, then, it will be no surprise to see him in the Black Stars and go on to become one of the best forwards in Africa.