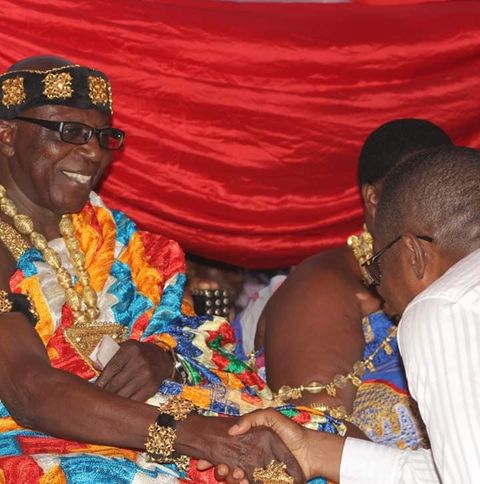 According to the Omanhene, the nomination was in the right direction adding the Nananom in Agonaman highly appreciate the elevation of their former Municipal Chief Executive.

Interacting with newsmen at his palace at Agona Nyakrom recently, Okofo Katakyie Nyarko Eku X noted that Hon. Mrs. Justina Marigold Assan performed creditably as MCE for Agona West thus deserves the new position to be assigned to her if given the nod.

“We had a cordial relationship with Madam when she served as MCE. She was the first woman to become Municipal Chief Executive for Agona West but discharged her duties creditably during her tenure of office. It is worthy to note that Agona West Municipal Assembly won overall Best for a number of times in Education and Sanitation beating the over 20 MMDAs in the Central Region and also placed enviable position in ICT completion which was organized by the Ministry of Communications under her administration.

We (Nananom) are confident that Hon. Justina Marigold Assan will spearhead the development of Agonaman and Central Region as a whole,” he emphasised.

Okofo Katakyie Nyarko Eku X assured the former MCE of unflinching support from the Chiefs and people in Agonaman in her endeavour to implement the vision and mission of His Excellency Nana Addo Dankwa Akufo Addo led NPP government.

“While commending President Akufo Addo for the nomination, we are appealing to H.E to consider our proposal for the establishment of Agona Central District Assembly to facilitate development in the Agona area.

Even though Agona East and West Assemblies are doing their best to improve the lives of the people, Agona Central if created will augment development”

“I want to thank President Akufo Addo for nominating my former boss to such a higher position as Minister-designate for Central Region.”