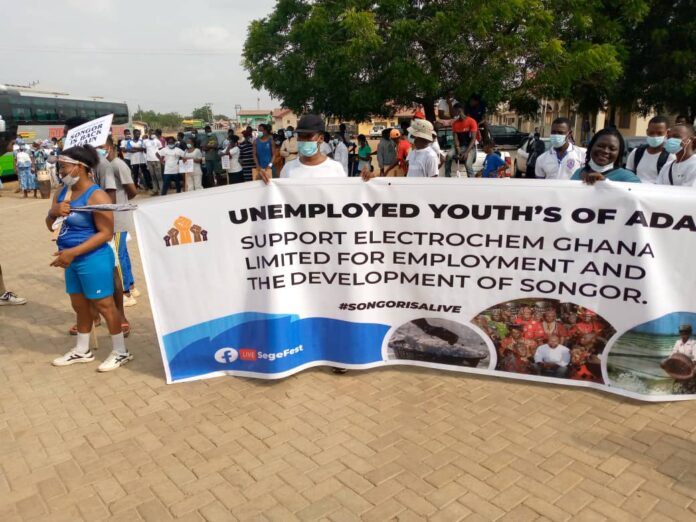 The District Chief Executive of the Ada West District, Hon. A. L. Akrofi has joined the Chiefs, the youth, and people of the Ada area to rally support behind McDan’s ElectroChem Ghana Salt mining project at Ada Songor and the development of the Songor Lagoon.

He, has, therefore, condemned all those leading protests and calling for the revocation of the ElectroChem Ghana agreement on the Ada Songor project

According to him, this is a project the chiefs and the youth have always supported so they won’t bow to attempts by some selfish individuals who want to run down a project that will create jobs for the teeming jobless youth.

The Songor lagoon had been a source of fishing, salt mining bettering the livelihoods of the inhabitants of the Ada area.

“ElectroChem has satisfied all requirements under the mineral act and this project was approved by Parliament. There was also a very extensive consultation that represented the Ada people so this kind of propaganda or whatever politics at this stage will not wash this time because we are fully behind MCDAN,” the DCE has assured.

The DCE’s reaction came after he was presented with a petition by the Progressive Youth Association of Ada in solidarity and in full support of the development of the Songor Lagoon by ElectroChem Ghana Limited on Tuesday.

The youth held a solidarity walk on the same day after which they converged at the Ada West District Assembly to present their petition to the assembly.

The solidarity walk by the Progressive youth was to demonstrate their readiness and commitment to ElectroChem Ghana’s Salt mining at Ada.

The petition was presented to the DCE on behalf of the Progressive Youth Association by Mr. Amartey Afedo, the Divisional Secretary of the Terkpebiawe Clan.

All these developments come on the back of a recent street protest by a faction of one of the original four (4) traditional clans of Ada the Terkpebiawe Clan who are claiming they were not consulted on the project.

Traditionally, it is a known fact that the Songor lagoon had a strong attachment to one of the original four (4) clans of Ada; the Terkpebiawe clan. They have always led in the spiritual fortification of the lagoon. A position we believe no one will take from them. The other clans, Adibiawe, Lomobiawe, Dangmebiawe and the rest have all played a role in the protection of the Songor lagoon till date.

The Songor lagoon forms part of the land acquired in the Public interest and vested in Government by virtue of state land (Ada Songor Lagoon – Site for Salt Industry), Instrument 1974 (E.I 30), and later amended by Instrument 1975 (E.I 57).

Part of the lagoon was leased to Vacuum Salt Products Ltd and Star Chemical Industries Ltd.

On April 24, 1992, The PNDC Law 287 was promulgated to set up the Salt Development Project Task Force (SDPTF) followed the caretaker committee and now Songor Salt Project to manage salt production in some parts of the lagoon; i.e. The Ionian to be precise. The rest was in the hands of the indigenes. That has been the situation for all these years.

The reconsideration of L.I 287 by parliament gave the opportunity to Dr. Daniel McKorley and his company Electrochem Ghana Ltd, to cut sod for the commencement of work in the Songor lagoon, to restore it to a modern company in November 2020.

The ratification in Parliament on Wednesday, 4th November 2020 by the august house of parliament, granted the mineral rights to dig for, mine and produce salt in the agreement for a term period of 15 years, by ElectroChem which upon expiration is subject to renewal under the mining laws of Ghana.

The demand for salt by the ECOWAS sub-region alone is about 3 million metric tons with Nigeria alone needing about 800,000 metric tons for its refinery industry. Ghana and for that matter, the Ada enclave stands a good chance to take the opportunity of this available market to develop its salt production to serve this market.

The private sector needed all the support and encouragement from the government to develop the sector. This has a huge potential for generating huge revenue for the government for its developmental agenda.