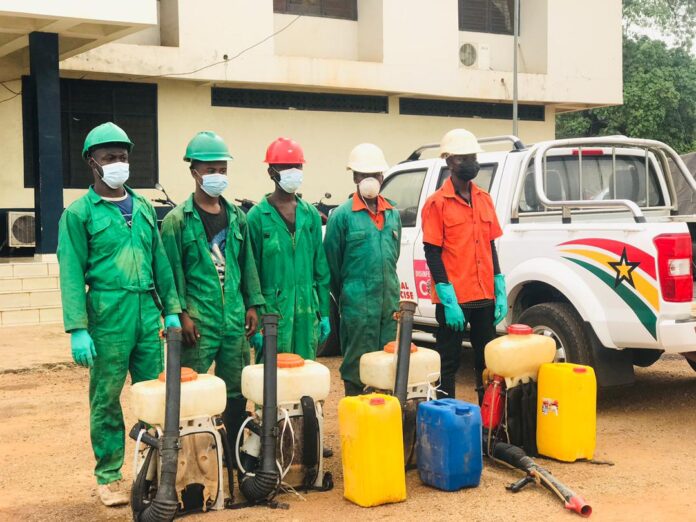 In a bid to combat the spread of Covid-19 in the country, Zoomlion Ghana Ltd., and its stakeholders have commenced the second phase of nationwide disinfection exercise of police stations, police training schools, and barracks in Greater Kumasi in the Ashanti Region.

The exercise which began yesterday in most regions in the country saw several police stations and barracks disinfected.

Speaking with the Divisional Command, Asokwa, Cosmos Kwabena Damoah, told the media his outfit has carried out sensitization and education in order for the people to observe the protocols. Adding that the sensitization has yielded positive results because no resident wants to be arrested.

“We have been enforcing the law at various stations, our men, MTTU on duty and everybody is enforcing and the people are complying so far so good; no serious cases have been recorded here. Generally, compliance has been good because when they don’t wear we force them to buy the nose mask and wear it. When you don’t wear then we arrest you and because no one wants to be arrested they comply”, he said.

He underscores that the disinfection and fumigation exercise of the police stations across the region will go a long way in the fight against this canker in the country.

He applauded Zoomlion Ghana Limited and the government of Ghana for their consistent effort in combating the virus; and urged for continuum.

He then assured that the law will be applied to anyone who violates any of the COVID-19 protocols.

According to the Ashanti Regional Manager of Zoomlion Ghana Limited, Mr. Philip Asante, about 3,000 police installations will be disinfected across the region.

He noted that the phase two disinfection and fumigation exercise of the police stations followed the recent increment in COVID-19 active cases in the country.

“This exercise is in collaboration with government to make sure all police installations are disinfected against the virus and other bacterial as to reduce the rate of infection”, he said.

He also cautioned the citizenry to observe the protocols despite the disinfection of public spaces in the country.

“We should not take the virus lightly at all; the virus is real, so let us all comply with the protocol to safeguard lives”, he stated.

The first place of contact in the Ashanti region was Asokwa Divisional Headquarters then the Asokwa District Headquarters followed by the Oforikom police, station, where offices like the CID office, Station officer’s office, Administration, MTTU office, cells, packing space were fumigated.