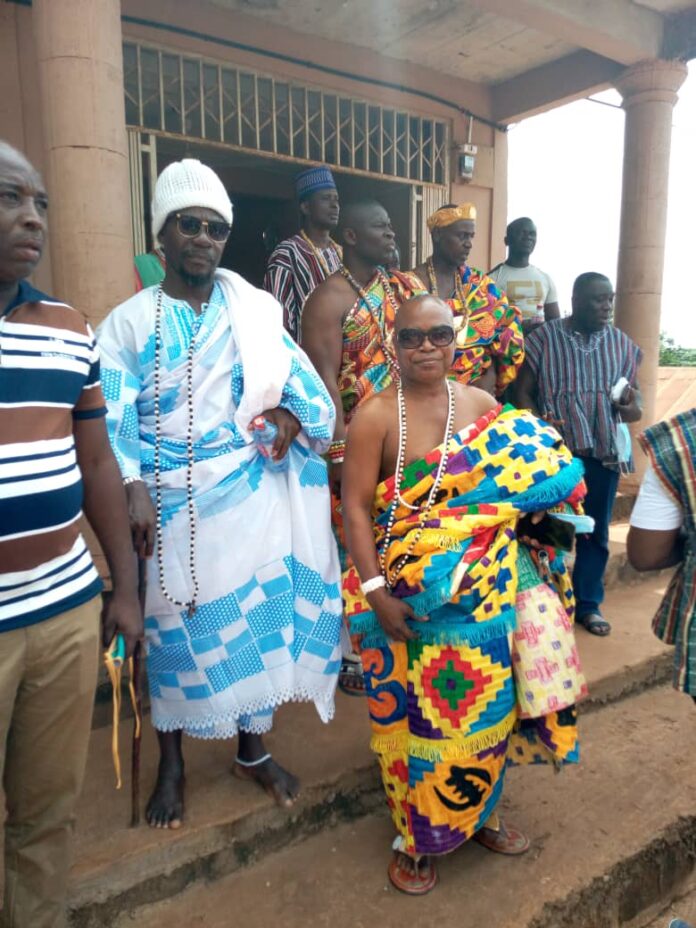 Friends from the media, ladies and gentlemen; I am honoured to welcome you to this morning’s press briefing.

On behalf of Nii Ashong Kojo III, Chief of Amrahia, Nii Anang Amartey, regent of Kweiman and on my own behalf, I wish to express my profound gratitude to you for taking time off your busy schedules to respond to our invitation, though coming at short notice. May God bless you for heeding to our call.

We have called you here this morning to lay before you few key issues that we wish to articulate.

We want to urgently draw government’s attention to the present happenings on lands released to us by the state in December 2020 last year without a plan that comes with whitepapers on land release due to the illegitimate activities of some state actors on the land released in variance to the directives of the president, His Excellency Nana Addo Danquah Akuffo Addo, announced by his vice, His Excellency Alhaji Mamoudu Bawumia at Danfa, last year.

They are holding onto the plan and cutting of the various boundaries for the three communities, being Danfa, Kweiman and Amrahia in a bid to conceal and protect their own interest to the detriment of we, the custodians of the lands.

Members of the press, the president has heeded to our request by instructing the stakeholders on the matter to release 40% of our lands to us but unfortunately, the whitepaper was given to us without the release plan.

Surprisingly, the very portion released to us has been hijacked by one Clement Gyato, a self-styled caretaker of government lands. Last week, he moved heavy equipment to site and started winning gravel on our lands without our consent, as you all can witness. When questioned, he said he was winning the gravel to repair roads but our investigation shows that he was actually selling the gravels to private contractors.

We have reported the matter to the presidency and National security personnel were sent to pick his numerous land guards he assigned to carry out the project. When they were picked up that early morning, an amount of GHC 20,000 was found on them and according to National security personnel, Gyato’s men did confirm it was money raised from the sale of gravel that morning.

Clement Gyato has been going round all over the places claiming he derives his powers from the first lady, Rebecca Akuffo Addo and that, he had even made allocation of 20 acres of land to her for her personal use, from the portion that has been released to us. He also mentioned the following people as the beneficiaries: Mr. Laud Commey, 20 acres; National Chief Imam, 20 acres and the president, Nana Addo Dankwa Akuffo Addo, 25 acres.

He at a point mentioned Mr. Laud Commey, operations director at the presidency as one of his bosses that gives him the support to do what he does.

Members of the press, this very same Gyato also made it clear that he is one of the major financiers of the NPP, hence he has the president under control and that nobody can challenge him so far as he and his land guards are concerned.

But our checks reveal that all the above names mentioned have no knowledge of Gyato’s exploits. He only uses their names to intimidate and forcefully grab what he desire.

This very same Clement Gyato is also cajoling us to allow him take over the management of lands released to us so his land guards could provide assistance by safeguarding our lands as if we require the services of land guards.

Members of the press, we would like to end our statement here by giving stakeholders involve in the issuance of the release plan a one week ultimatum to hand over the release plan to us or else, we shall take possession of the portion allocated to us because we can’t sit back and watch Gyato destroy our lands before we get the release plan. He who fetches ants infected firewood must get ready for the visit of wild lizards.

We thank you for coming.