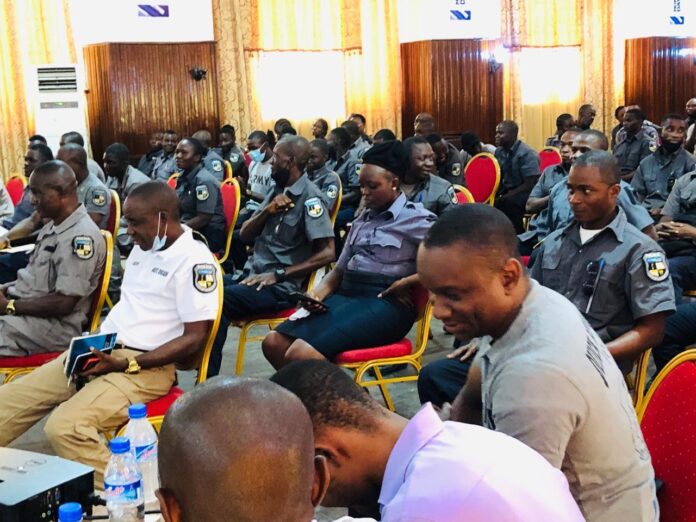 Meanwhile, he expressed delight over the training remarking that “the level of professionalism employ by the City Police in their community engagement will invite a good relationship between the police and the public, which is a very paramount coordination in making them effective and timing on their Jobs”.
He added that the full involvement of the Monrovia City Police in the workshop will continue to enhance capacity building.
The workshop mainly focused on Human Rights & Discrimination, Public Safety, Investigation, Incident Response, Community Policing, Enabling Services & Reporting, Building Institutional & Organizational Capacity.
The workshop presentation captured the 4 SWOT ANALYSIS: Strengths, Weaknesses, Opportunities, and Threats as key points developers in making accurate decisions.
Based on these analyses the Monrovia City Police will be able to work in close relationship with the residents of Monrovia especially the community in ensuring efficiency and effectiveness in the discharge of their duties and responsibilities.
The workshop was presented by Felix F. Walz, a senior UN Police Advisor with UNMIL and the Liberia National Police, a senior Police Captain of the State Police Zürich Switzerland, and Chairman of the Bowier Trust Foundation Switzerland.
At the end of the workshop, Felix F. Walz extolled Monrovia City Police for the level of professionalism and maturity exercised.
The workshop was in full attendance by high-ranking officers of the Bowier Trust Foundation Switzerland and the Monrovia City Police.