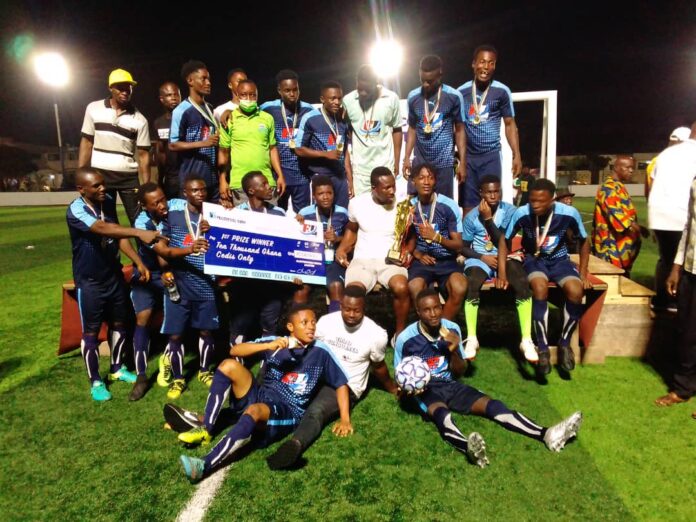 With an exceptional display of talents and skills, the youth from Adjamanikope managed to beat TamaToku 6-5 on penalties to lift this year’s McDan Ada Youth tournament cup at the La McDan Town Park yesterday.

The tournament which was held on the theme “Uniting The Youth For Massive Development and Employment in Ada” saw ten (10) teams, 5 from Ada West and East taking part.

Adjamanikope secured their final place berth with a single win over their counterparts Goi whiles highly rated side Sege lost narrowly to the TamaToku in the first and second semifinal matches respectively.

In a quest to lift the ultimate, both sides, TamaToku and Adjamanikope played an exciting game in the finals but could not find the back of the nets after full throttle, despite creating a lot of chances.

Speaking after the event, the chairman of the McDan Group, Dr. Daniel McKorley, expressed his delight at the display of skills from the youths.

“I was surprised to see the standard of play from the teams, I was just told that most of the top players in the country are from Ada and if you go to Ada, there’s nothing much to talk about in terms of sports, but they have the heart and tenacity to play the game. So the little I can do for them I believe that this is the right time to,” Dr. Daniel McKorley stated.

He added that plans have far advanced for the construction of more turfs in the country in order to create employment for the youth.

“The reason why we are constructing more turfs is to create jobs for taxi drivers, hawkers, and everyone, so we are set to construct one in the North, two in Ada, we are building a big one at Bawaleshie and Teshie as well. This is what I am doing to touch many lives in the country,” he added.

The CEO of Wembley Construction, Mr. Robert Coleman, disclosed that their objective is to build and provide quality turfs in the country.

“We at Wembley Construction are determined to give Ghanaians the best when it comes to AstroTurfs in the country. We are a family with McDan and with all the turfs that will be constructed in few coming days will be of the best standard and highly recommend by the international communities,” the CEO of Wembley Construction, Mr. Robert Coleman said.