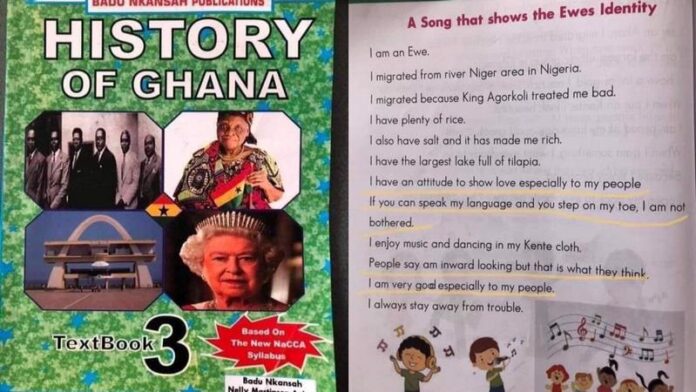 Volta Regional House of Chiefs is demanding the immediate withdrawal of the controversial textbooks said to have stereotyped Ewes in the country.

According to the chiefs, the said publication is “distasteful and a disgrace to the authors and publishers”.

They in a statement said: “We deem it highly reprehensible for those responsible for this offensive publication, to harbour such vile thoughts about their fellow citizens of Ghana in the twenty-first century”.

Aside the withdrawal of the books, the Volta Regional chiefs are also demanding an unqualified apology from the publishers.

“We therefore unreservedly condemn this singular demonstration of tribal bigotry and prejudice and call on those responsible for the offensive publication, to withdraw the same from circulation and to destroy every part of the offending material.”

“We further demand an unqualified apology from the authors and publishers of this base material to be rendered to all Ewe speaking citizens of Ghana. In addition, we urge other ethnic groups in this country, to condemn such divisive publications which only serve as a recipe for chaos and disunity.”

The Volta Regional House of Chiefs made the demand in a statement issued on Monday, March 15, 2021.

The content of the textbooks sparked criticism on social media from members of the Ewe ethnic group who claimed they were being stereotyped.

The North Tongu MP, Samuel Okudzeto Ablakwa has subsequently filed an urgent question in Parliament for the Education Minister, Dr. Yaw Osei Adutwum to answer on the matter.

Meanwhile, the National Council for Curriculum Assessment (NaCCA) has said the books have not been approved for use in schools.

In an earlier statement, the Council asked publishers of the books to withdraw them from the market.

“In each of these books and others discovered on social media, the authors make inappropriate references to personalities and ethnic groups which are deemed unfortunate distasteful and are in contradiction with NaCCA’s Book Submission Guidelines,” the council said in its most recent statement on the matter.

Below is the statement from the chiefs