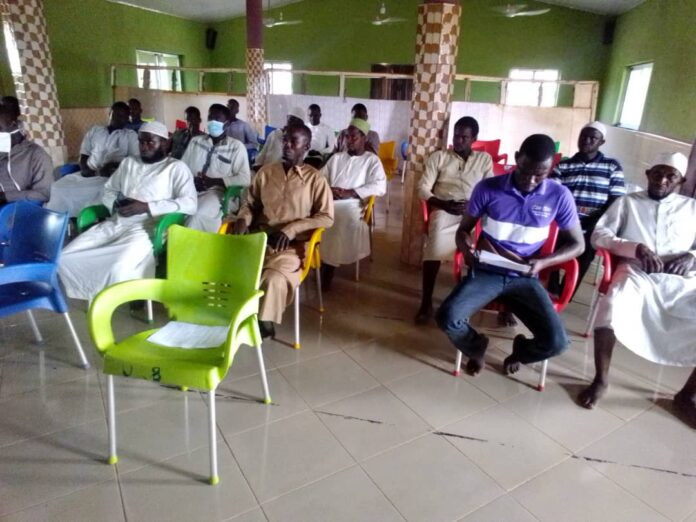 The Muslim Umma across the rank and file of the North Gonja District in the Savannah Region have launched a passionate appeal to President Nana Addo Dankwah Akufo-Addo to either elevate Mr. Adam Eliasu to a higher position or re-appoint him as the District Chief Executive.

Made up of a coalition of Muslim Imams from the various communities in the North Gonja District, the group believes their demand comes on the back of a proven track record and outstanding performance of the DCE over the last four years.

At a press briefing, Hassan Yahaya Mohammed, the Chief Imam of Ahlasunnah Waljamah who spoke on behalf of the Imams indicated that Mr.Eliasu has distinguished himself in discharging his duties as a District Chief Executive and has done so perfectly by pushing government business in harmony with all stakeholders.

According to him, they as Islamic Clerics are aware that they are not politicians and don’t intend to be but, the critical role played by a DCE in the socio-economic development of every district makes it imperative for them to have an interest in the kind of person that would be appointed to steer the affairs of the district.

He said over the last four years under review, the DCE has executed a lot of life-changing projects in the history of the district, ranging from the drilling of numerous boreholes; extension of electricity; the building of modern toilets, markets, and schools; creation of new roads; empowerment avenues for women, youth, students and farmers; and returning the lost integrity of Imams.

They believe when retained, the DCE will further entrench the success of the government of the day in the district and continue very important projects, programs, and policies.

The DCE in their estimation has not changed his demeanor in handling the grassroots since his first appointment and this has made the NPP largely attractive to many people in the constituency by changing their long-held wrong notions about the party.

“We must say that we have been enthused by the sterling manner in which he discharged his mandate. It is on the back of this outstanding performance that we the above group of Imams want to call on the appointing authority to either promote Mr.Adam Eliasu to a higher office in government or maintain him as our DCE in line with the mantra of the NPP, ‘One good term deserves another,” he said.

Musah Shaibu, Secretary to the group, reiterated the fact that the delivery of the Daboya-Mankarigu Constituency seat for the first time since its creation to the NPP is one clear evidence of the unmatched output of the DCE.

According to him, the District Chief Executive in a spirit never seen before, engaged in the door-to-door campaign in almost all the communities in the district during the 2020 electioneering campaign and without sabotage, delivered the parliamentary seat as well as the presidency for the NPP in the constituency.

He said the diligence, hard work, and humility of the DCE has endeared the NPP to many hearts in the district, adding that,” for the NPP to continue enjoying our support throughout the four years mandate given and the next general election, we appeal to the appointing authority to hearken to our plea by reappointing Mr.Adam Eliasu as our DCE.

The group appealed to the Minister of Lands and Natural Resources and MP for Damongo Constituency, Mr.Samuel Abu Jinapor, the Savannah Regional Minister, Mr. Saeed Muazu Jibril, and the Savannah Regional Chairman of the NPP, Mr. Iddrisu Sulemana, and his regional executives to help amplify their clarion call to the president for a better New Patriotic Party in the North Gonja District.