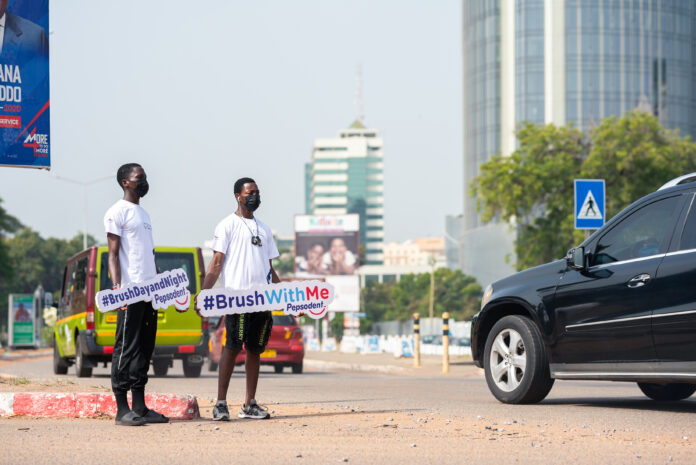 Not so long ago social media was buzzing with videos and pictures of celebrities and influencers joining in on a challenge to brush day and night with their children and families.

The most notable of these online posts was Sarkodie and his daughter bonding over their brushing routine. This video trended for days and encouraged many other Ghanaians to join the seemingly impactful challenge.

The #Brushwithme Challenge is an initiative that was launched on world oral health day by Pepsodent Ghana. As the leading oral care brand in the country, they make it a mandate to encourage good oral habits among Ghanaians. In doing so, they have partnered with the Ghana Dental Association to embark on activities that educate citizens on practices that promote oral hygiene including brushing day and night.

This year after a research report from Pepsodent was published, it became apparent that although the COVID-19 pandemic had caused people to reprioritize health and wellbeing, oral hygiene had been left to the curb.

According to the report, compared to 2018, fewer people are brushing twice a day, with 1 in 3 adults going a whole day without brushing their teeth and when adults, especially parents who skip brushing, so do their kids thus increasing the rate of oral health issues within homes and families.

It is against this backdrop that the #Brushwithme challenge initiative was birthed to realign health priorities and remind parents of their responsibility to take care of the oral health of themselves and their little ones, and to encourage families to get brushing better, together.

So far, the campaign has been a huge success with celebrities and public figures including Oheneyere Gifty Anti, Okyeame Kwame’s children, Sarkodie, and Eno Quaigrine of Talkative Moms using their large platforms to remind parents on the importance of building healthy brushing routines with children.

Not only have influential personalities jumped onto the challenge but the team at Pepsodent Ghana has taken #Brushwithme to the children of Osu children to show that not only parents play a role in helping build habits in children, but guardians, teachers and anyone who has been handed over the responsibility of having children in their care must be part of the collective effort to be agents of change.

The #Brushwithme Challenge is a step in the right direction by Pepsodent Ghana, and although Rome was not built in a day, it has the potential to gradually create the shift needed as Ghanaians, parents and guardians set an example for children as they continue to brush their teeth together, day and night to promote good oral health for the whole family.

University of Ghana flooded after rains