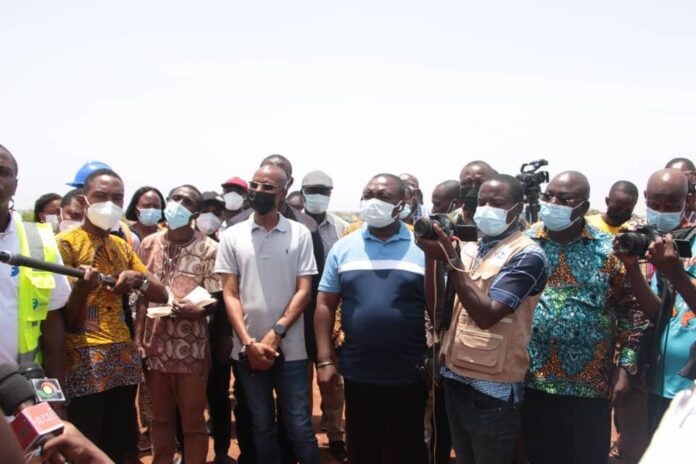 The central government has been asked to ensure that the testing of the quality of water at the various landfills is done at least twice every year.

Making the call, members of Parliament (MPs) of three Parliamentary Select Committees—Local Government and Local Government and Rural Development, Works and Housing, and Environment—contended that it was good UNICEF was supporting the metropolitan, municipal, and district assemblies (MMDAs) to test the quality of water at the landfills across the country.

The MPs made the call on Wednesday, April 28, 2021, during a working visit to the Gbalahi landfill site at the Sagnarigu Municipal Assembly, Northern Region.

Addressing the media, the Chairman of the Committee on Environment, Dr Emmanuel Marfo, who is also the MP for Oforikrom in the Ashanti Region, entreated the government to ensure the testing of the water quality at the various landfills is done twice a year.

According to him, it was not right to live the testing of the water quality at landfills to the care of donors.

In this regard, he called on the government to support the local assemblies with adequate funds for them to carry out regular water quality testing at the landfills.

“The testing of the quality of water at the landfills must not be left at the mercy/care of donors. Government must find a way of supporting the local assemblies with funds—if it means integrating it into the national budget—so that the testing can be done at least twice in a year—every six months,” he submitted.

Furthermore, Dr Marfo encouraged the assemblies to ensure the quality of water at the landfills are closely monitored and treated to avoid a situation where they could enter the food chain.

“…and the danger here is that if this toxic water from the landfills is not treated and it finds its way into the food chain through farms close to these sites, that will spell disaster for this country,” he warned.

The Chairman of the Committee on Local Government and Rural Development, Mr Emmanuel Akwasi Gyamfi, encouraged Zoomlion Ghana Limited to speedily complete the ongoing construction of Integrated Recycling and Compost Plants (IRECoPs) in all the sixteen (16) regions.

The IRECoPs, he pointed out, when completed, will help in tackling the problem of waste management in the country.

“I would like to commend Zoomlion Ghana Limited for the good job done so far. We will, however, like to encourage the company to speed up works on the projects to help in solving the sanitation issues in the country,” he encouraged.

He indicated that all the 16 regions were ready for the operationalisation of the waste treatment facilities.

He also applauded Zoomlion for taking up the challenge of constructing liquid and solid waste treatment facilities.

“It is a big challenge and one that should have been taken up by the government, but the collaboration between Zoomlion and the government is laudable,” he noted.

According to him, members of the three committees were impressed with the progress of work and management of the Gbalahi landfill site.

“Members of the committees are happy with what we are witnessing here at the Tamale landfill site,” he said.

He was also full of praise for the Northern Regional Coordinating Council for their efforts in managing waste in Tamale and its adjoining towns and communities.

On the management of landfills, a Ranking Member of the Local Government and Rural Development Committee and MP for Odododiodio, Nii Lantey Vanderpuye, commended managers of the Tamale landfill site for managing it well.

However, he called for compensation for rice farmers who had to relocate due to the site and whose farms were destroyed by polluted flooding waters from the landfill.

“I must commend whoever is managing the landfill [Gbalahi landfill] here because I have gone up there and I like the way the place has been compacted.”

….I was here last year and it was bad but this time it is very good. I would like to, however, recommend that rice farmers who had to relocate due to the dumping site are given some compensation by the government,” he recommended.

Most of the farmers, he explained, had to relocate due to the poisonous water coming from the dumping site, adding that “and so I am particularly happy I am seeing this.”

The General Manager (GM) of Waste Landfills Company Limited, Peter Dagadu Kwei assured the parliamentarians that his outfit was putting in place measures to facilitate the smooth operation of the recycling plant.

He indicated that by the end of August, this year, the Tamale IRECoP will begin operations.

On that score, he stressed the need for the enforcement of the sanitation bye-laws by the local assemblies.

Members of the three parliamentary select committees have been touring some recycling plants across the country and are impressed with the work done so far.

Already, the team has visited landfills and ongoing construction of IRECoPs in regions including Western, Western North, Ahafo, Bono, and Ashanti Regions.

With the Northern Region tour completed, the team concludes their tour with a trip to the Savannah and North East Regions before Parliament reconvenes.