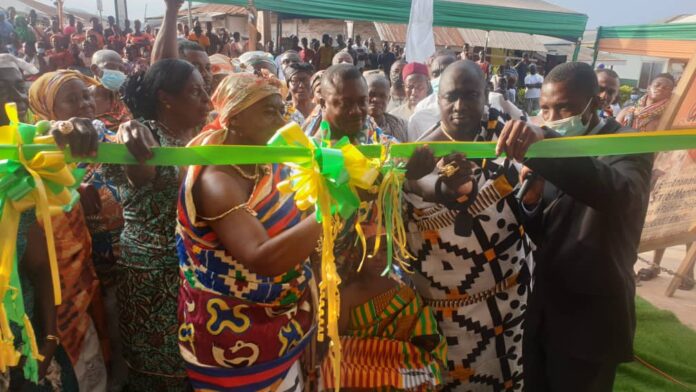 The training centre with the name ‘Afrakay’s Skill Training Centre located at Asante Akyem Agogo Nanahemaa’s building near the main lorry station, around the Chief’s Palace is intended to train youth in fashion design courses under COVET and NVTI for six (6) months.

Speaking with Nanahemaa Afrakomah Serwaah Kusi Oboadum, she said, the establishment of a skill training centre is one of the initiatives she has to transform and support the livelihood of the youth in her jurisdiction.

She said the plan is to expand it to a bigger structure where carpentry, tiling and other crafted skills can be learned and develop.

Agogohemaa appealed for assistance to construct a hostel facility to accommodate vulnerable and trainees from afar.

Mr Ellison Owusu-Fordjour, Principal, College of Tropical Agriculture and the keynote speaker at the event said, skill development will be business as usual if not delivered through the competency-based approach.

According to him, traditional education and training have not baked her products fully; which graduates have had to undergo complete retraining at their respective workplaces or undergo apprenticeship training after graduation as a panacea for acquiring the needed competency.

“For instance, an HND or BSc. Fashion and Textiles studies graduate after say four (4) years of studies at a higher institution of learning, has to undertake apprenticeship training with a seamstress or tailor near him or her to acquire the critical competency to set up their business or look for a job. This unfortunate phenomenon which is very characteristic of the hundreds of thousands churned out of training institutions has culminated in high unemployment rates and deprived individuals, families and society of economic transformation and improved livelihood”.

He said Entrepreneurs and Intrapreneurs here present, competency-based approach to skill development implies that learning is constructed by the learner to acquire competencies and standards generated from the real world of work.

In other words, what is important learning is defined from the perspective of the practising entrepreneur or the would-be employer. This aspect of the competency-based approach renders skill development flexible and requires less time compared to the traditional approach. I am sure many prospective applicants may be wondering how they can achieve defined competencies in six (6) months as advertised by this centre when the narrative is at least two(2) years if not more. Let me assure such would-be learners that it is possible since this centre is certain to practise the competency-based approach,” Mr Owusu-Fordjour explained.

Consequently, Critical thinking, research and innovation lead to the discovery of a new product that solves current market needs. Moreso, various soft skills-excellence, professionalism, time management, communication and so on help to sustain and grow businesses.

He then urged learners to think more, do more and value more to enhance their professionalism.

On his part, Hon. Francis Oteng Boateng, Municipal Chief Executive, Asante Akyem North, commended Nanahemaa for embarking on such a great initiative to improve lives. Adding that, the Assembly has started construction of Skill Training Centre but yet to be completed.

” Technical and Vocational Training Centre is something we have been thinking about for some times now because we some Senior High Schools but no Skills Training Centre and Nanahemaa’s came as a surprise. As a government, we will try to support and expand to much a bigger one as she rightly requested. Going forward we will like to ask Nanahemaa to release some land for the expansion and we are sure when we get the land we will also get people to help build the Centre”, he said.

He seized the opportunity to call on parents not to force their children to enrol in traditional teaching and learning schooling method rather support their crafts and enrol them in Technical and Vocational Training Institute to develop their crafts.

“There is no job without Skill Training, some people aware that they are crafted and that’s what they must do but their parents forced them to go through the traditional education which I will advise parents to support their children to develop the skills in training institutes”.

Mr Ernest Owusu Bempah, Head of corporate communication, Ghana Gas and indigen of Asante Akyem Agogo who described Skills as an ‘Individual Greatest Assets’, said skills training provided one with the opportunity to survive in areas of specialisation and therefore advised the youth to embrace it and show enough commitment.

He then called on all indigenes of Asante Akyem Agogo to help support Nanahemaa’s initiative to enrich more lives and also raise the flag of Agogo higher.

Dr Edward Asadu, former MP, Asante Akyem North urged everyone to get involved in this laudable initiative initiated by the Queen Mother.