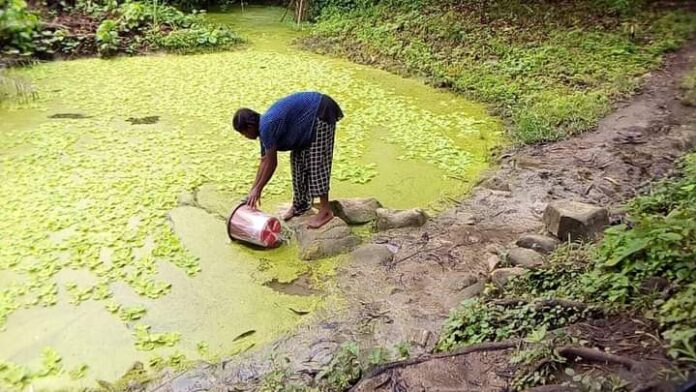 Non-Governmental Organization, As I Grow (NGO) in its quest to improve the living standard of some deprived communities in Ghana through its ‘Safe Water Campaign Project’ has revealed how poor water condition is crippling lives in some rural areas.

According to the Chief Executive Officer of the organization, Isaac Debrah Bekoe, about 6000 thousand farmers lack access to good drinking water talkless good sources for their farm produce.

He furthered that some communities he and his team visited recently are suffering from myriads of waterborne diseases as a result of the poor and lack of potable water in their communities.

“Its quite unfortunate that 6000 thousand farmers do not have good sources of water to drink and also for their daily activities but still have to work to promote the agricultural sector.

“Some of the communities they did their research and surveillance which were in the Suhum and the Akuapem North Municipality in the Eastern Region prayed the organization to come to their aid in helping them come out of their plights. To mention a few of the communities like Yaw Laga, Kweku Afum, Kofi Yanky, Miawani, Bana, Dzaka and Koransang Kese which are all in the Eastern Region lacks portable water”.

Mr. Bekoe insisted these communities over the years have experienced a massive decline in school attendance among children and adolescents since most children have to drop out as a result of lack of water for domestic use.

“Some people have to stay without water for almost a day during the harmattan. Many women continue to experience menstrual problems and series of health complications and children and adults having skin diseases as a result of this. Others have also had many health issues which lead to their deaths.

“The water crisis has also led to massive rural-urban migration which is posing a lot of threat to the agricultural sector.”

Meanwhile, the community members said their only major source of clean water now is “rainwater” which is also seasonal.

Mr. Debrah, however, called on the government, individuals, philanthropists, institutions, and non-governmental organizations to come in and support As I Grow Ngo to protect these communities by giving them safe, portable, and hygienic water to drink.