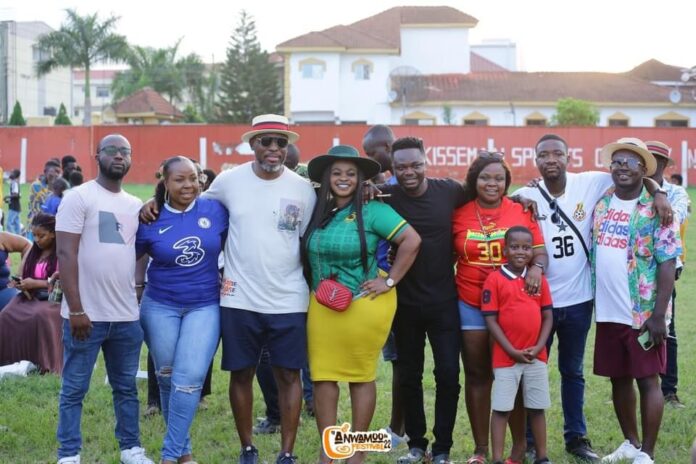 Thousands thronged this year’s Anwamoo festival dubbed “Rep Your Jersey’ edition making it one of the biggest Rice festivals so far.

The event was held successfully in Accra with a huge patronage giving the event an undeniable presence in Ghana and beyond.

The event comnenced atound 11:am and was already packed with some good music and a lot to drink as we get ready to eat.

Anwamoo festival has set a standard, gathering different and various people from all part of the country to eat and network.

Media personalities, corporate, business class and politicians were not left out as they attended in their numbers to grace the event and enjoyed some Anwamoo.

The festival fed over 2,000 people and the excitement was unimaginable.

The Anwamoo Festival over the years have been successful and the Rep Your Jersey edition was not different as people shared their joy to be part.

Anwamoo festival this year also invited Apam orphanage which is located at pokuase to come and dine with us at the festival.

They represented in their numbers and had a lot eat, had fun and also interacted with others.
We had a fund raising for the kids and others also promised to visit them in December.

The event was also attended by delegations from this year’s ‘Beyond the Return’ as Anwamoo festival is part of December in Ghana line up program for Ghana Tourism Authority.

The event as usual did the cooking competition among the men with the likes of Ola Michael a presenter at Neat FM, Francis, Waani D’barber a celebrity barber and Chef and Nana Kwame Gyan, media personality with Onua fm who was judged as the winner.

The Woso contestants, a reality TV show on Angel TV were represented and supported by the men in the cooking competition.

AFBO B Events which happens to be the organizers of Anwamoo festival led by Afua Foriwaa Boafoh and her team expressed their profound gratitude and assured the public of their commitment to make the event one of the best in Ghana and Africa.

Anwamoo festival promises to come back bigger, stronger and huge next year in 2023.