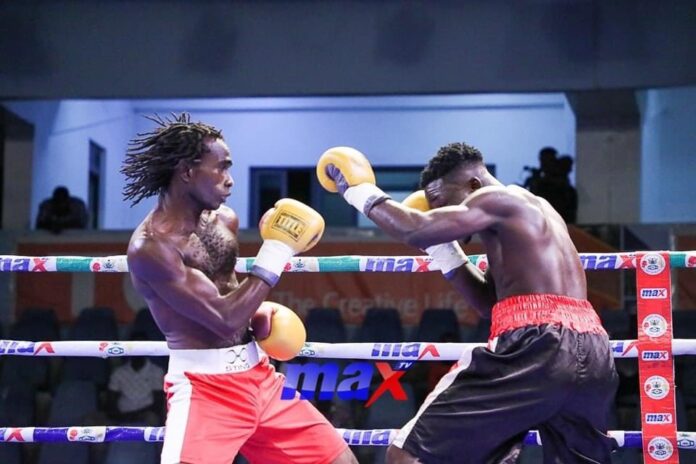 Fight Night 19 which was the penultimate show of the De-Luxy Paint Boxing League lived up to its billing as boxers on the show thrilled fans at the Bukom Boxing Arena on Saturday evening.

Heavyweight, Philip Aryeh Tetteh stopped Erasmus Anum in round 4 after the latter failed to continue the exciting bout to avoid much punishment.

Middleweight Benjamin Nii Saka Bulley of the Palm Springs Club put up a good show but lost to super welterweight Henry Malm on points. Bulley has now lost one of his three fights, while Henry Malm made it his fifth career victory.

The much-expected bout between Eric Asante and Azumah Mohammed which was a challenge between Charles Quartey Boxing Gym and Sonia Boxing Gym could not happen, so Charles Quartey still lead the pack with one fight night to go, and may win the Renault car at stake.

Also Michael Abban, popularly known as Black Spider failed to turn up at the weigh-in so his opponent Akimos Annan Ampiah of Attoh Quarshie Club fought and stopped sub, young Prince Quaye in the third round.

However, Gabriel Coffie of Ghana who is also a fashion designer increased his record to 7-0-1 against Togolese Komlangan Hounkpatin.

Cameleon, a popular musician was there to offer entertainment.

The groundbreaking professional league which is the first of its kind in the world is organized by Imax Media Promotions and sanctioned by the Ghana Boxing Authority (GBA).

According to Match Maker, Mubarak Nanor, there would be other exciting bouts on the last day of the first edition of the Pro League, and urged boxing fans to come early not to miss the action.

The Ghana Boxing Authority (GBA) presented certificates to 40 participants of the Referee/Judge course organized in conjunction with Imax Boxing Promotions.