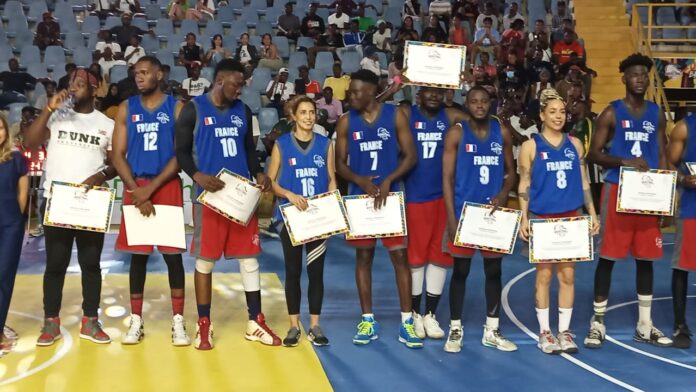 Professor Azumah Nelson and Mr. Kyei, an executive of Glico presented the winners with the trophy and certificates.

The exciting match that featured select sides of Ghanaian and Nigerian basketball players resident in Ghana was played under floodlights at the Bukom Boxing Arena of the Trust Sports Emporium.

The youthful Ghanaian squad managed to hold the game with their counterattacks to win the match by one point and took bragging rights over their West African brothers.

The Ghana Immigration Service (GIS) basketball team who came in as a late replacement for the USA select side also won over France 33-30.

The GIS team came from behind to snatch victory from the French who made a blistering start to the match.

The winners of the games will donate their winnings to an orphanage of their choice in the coming games.

The festival was organised by RITE Sports under the auspices of the Beyond the Return Committee.

The Night of Sports, Fashion, and Music saw a fashion show by Beautiful Beneath and Elikem Kumordzi and some musical performances.

Mr. Yaw Sakyi of Rite Media said he was impressed and excited with the show and it would come off every year with the addition of more African countries.

He thanked the sponsors, Ebony Condoms Coca-Cola, De’lish, Caveman, French Embassy, December In Ghana, and Beyond The Return.

ALSO READ  Jacob Osei Yeboah chairs The Methodist Church Ghana’s maiden International Widows’ Day in Ghana
AMA GHANA is not responsible for the reportage or opinions of contributors published on the website.