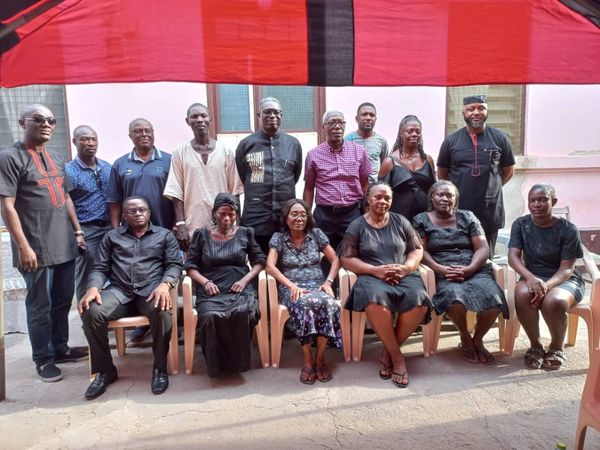 The Ghana Olympic Committee (GOC) executive board led by President Ben Nunoo Mensah on Friday paid a visit to the family of the late Mr. Emmanuel Tetteh, former President of the Ghana Judo Federation at Osu in Accra.

Others present were Mr. Yaw Ampofo Ankrah, Mr. Sammy Heywood Okine, and Mr. Ebenezer Amuzu of the Communications Directorate of the GOC. They were joined by officers of the GOC, Edem Avafianyo, accountant, and administrative assistant Seth Avayi.

Mr. Nunoo Mensah paid glowing tribute to the deceased, describing the late Tetteh as a great personality who excelled in his duties as a sports administrator and former officer of the Ghana Customs who chalked many successes and was even honored by the king of Japan.

He expressed that the nation has lost an important gentleman and promised to support the funeral to give him a fitting burial.

“In fact, the late Tetteh was one of the elders in the GOC who I often consult for advice, and his demise is very painful, we have really lost one of our pillars, and may his soul rest in perfect peace,” he said.

Mr. Delphina Quaye on behalf of the GOC Board presented some cartons of mineral water to the family and the GOC President led the hierarchy to sign the book of condolence.

Mr. Victor Tetteh, a brother who represented the family thanked the GOC Board for the visit and words of encouragement. He noted that the family will meet to decide on the funeral arrangements and date.