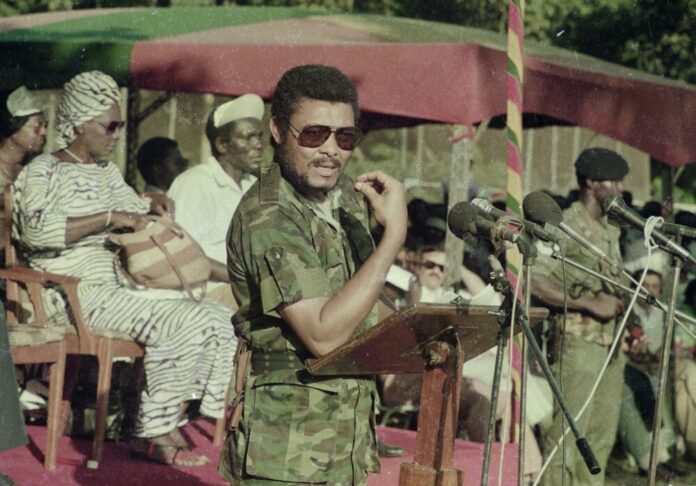 Merriam – Webster dictionary defines Charisma as ‘a personal magic of leadership arousing special popular loyalty or enthusiasm for a public figure such as a political leader’. Per the definition above, any individual who possesses such qualities can be referred to as charismatic. Notably, charisma is a subjective term, thus it can be defined from one’s point of view.

Flight Lieutenant Jerry John Rawlings of blessed memory is a charismatic figure by all standards irrespective of political and ethnic consideration. This article will considerably substantiate the charismatic features of Jerry John Rawlings, affectionately called Papa J. The writer intends to situate the charisma of ‘Papa J’ within the definition from not only Merriam – Webster dictionary but from available definitions as well.

Undoubtedly, leadership and charisma are inextricably connected. This simply means that charisma is associated with leadership hence it is an instinctive component of charisma and it is trite knowledge that Jerry John Rawlings ruled Ghana from 1981 to 2001.

No other person has ruled Ghana for such a long period of time but ‘Papa J’. He goes down in history as the longest-serving leader of Ghana. I am part of the many who opine that Rawlings’ tenure as ruler of Ghana can’t be outdone looking at the provisions of the 1992 constitution which allows 2 terms only for persons who occupy the presidency.

Next to leadership is the charm to attract and maintain loyalty as well as gather and charge crowds. At this point, the question ‘is Rawlings a charismatic figure” is certainly a rhetorical question that brings smiles to the faces of political commentators as well as historians. The answer is dispassionately obvious, yes he is a charismatic figure! His ability to charm, wow and conscientize individuals dates back to his military days.

History teaches us that, a young officer in the Ghana Air Force led his colleagues to stage a coup against the government of Fred Akuffo in 1979. However, this was unsuccessful as they were arrested. Jerry John Rawlings is the name of the said junior officer who attempted the coup. Rawlings later succeeded in overthrowing the government in 1979.

Looking at precedents, was Rawlings not too young for that feat? That’s the magical leadership in Rawlings as early as 32. Imagine a junior officer mobilizing colleague soldiers for such a treasonable and unpardonable act of overthrowing a military regime who got to power by same means? How convincing and persuasive did he sound to his colleagues and seniors? When charisma speaks, age and rank lay a wreath, that’s the Papa J type of charisma.

Historically, coup d’états are staged by top ranking military officers. For instance, late Ignatius Kutu Acheampong was a senior military officer and of 42 years when he staged a successful coup against Busia in 1972. Also, the 1966 coup against Osagyefo Dr. Kwame Nkrumah was led by senior security officials like Colonel Kotoka, Police Commissioner John Hardley, General Ankrah among others. It is obvious that Rawlings again goes down in history as the youngest military officer to execute a coup, a successful coup d’etat to be precise.

Permit me to say Rawlings’ charisma begun at a ‘tender age’. His persuasive ability and charm to influence was his enviable tool. ‘It is worth knowing that during his imprisonment after his unsuccessful coup, Rawlings was sneaked out of prison by his colleague soldiers.

An attempt to portray Rawlings as a leader without excesses will be tantamount to historical and political inaccuracy and dishonesty. His transition from a military ruler to constitutional ruler is quite fascinating as many argued he would never relinquish military power. Arguably, Rawlings can be said to be the most likeable dictator especially in Africa.

It is absolutely perfect to not admire dictators but at the mention of the name Rawlings, the masses bestow praises while the few elites have reservations which I respectfully acknowledge and would use this piece to sympathize with the families of those executed by firing squad as well as those who were tortured, not forgetting those who lost properties.

The accolades and appellations that Papa J commands is still a bane to the families of victims of the excesses of Rawlings. They just cannot fathom the love Rawlings gets from the masses. This was very evident in the unfortunate comments that trended after the announcement of Rawlings’ demise. Rawlings left the political scene in 2001 but his charisma never left our political environment. He has passed on to eternity, yet his charisma is still felt.

His ability to move crowds and gatherings is a known phenomenon in all aspects of our lives including entertainment. His name is used synonymously to ceremony master in songs of musicians like Shatta Wale, Manifest, Sarkodie, just to mention a few. For instance, there is a line which goes like “I pull crowds like J. J” in Manifest’s track Believe ft Mugeez.

The said lyrics can be examined to mean a simile which draws a comparison between crowd pulling and the personality of Jerry John Rawlings. Talk of Rawlings’ “boom’’ speeches, then questioning Rawlings’ charisma falls flat as his charisma is untenable. His boom speeches resulted to boom mongers as people always attended political gatherings just to hear him speak.

There is a phenomenon political scientist and pollsters refer to as the ‘Rawlings Factor’. This actually led to series of articles titled the Rawlings factor as well as a book by Kevin Shillington titled “Ghana and the Rawlings Factor’. Quite recently, the Political Science Department of the University of Ghana – Legon, was reluctant in making their findings of the 2020 election polls. When asked by the media as to why their delay in publishing the results of their findings, their answer was that the death of Rawlings would have an impact on the election so they would have to conduct another polls before publishing.

Jerry John Rawlings is synonymous to charisma when facts are the basis for the discussion. Although charisma is subjective, the writer is of the view that, irrespective of the diverse definitions of charisma, there is a slot for Papa J to fit in. Ghana has been blessed with Charismatic leaders in various fields. Talking charisma in political leadership without mentioning Jerry John Rawlings would be unheard of and in most cases would attract intellectual chastising. Politically, Jerry John Rawlings is next to Kwame Nkrumah. Until the definition of charisma is redefined to mean anything but charming leadership, Papa J is a charismatic figure. REST WELL SIR