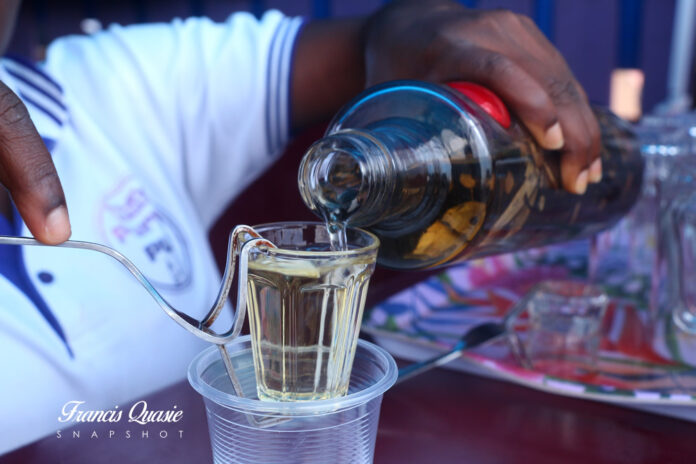 Three men who drunk a suspected poisoned local gin, popularly called “apketeshie” from a drinking bar at Aiyinasi in the Ellembelle District, have died.

Bodies of the deceased, namely; Mr John Andy, 43, Mr Loius Amangua, 41 and Mr Paul Etwe, have since been deposited at a morgue in the Sekondi-Takoradi Metropolis for preservation and autopsy.

Narrating the incident to the Ghana News Agency (GNA), the Divisional Commander of Ghana Police Service at Esiama, Assistant Commissioner of Police (ACP), Dodzi Godact Hlorazi, said the deceased on Friday, January 22, 2021, bought Akpeteshie from a drinking bar at Aiyinasi.

According to him, Mr Andy and Mr Amangua shared a tot each of the drinks bought at 1.00 Ghana cedis.

He said after they took the drink, the two went to a nearby village called Nyamebekyere, where they complained of stomach-ache and suddenly passed on.

ACP Hlorazi said the third, Mr Etwe who also took one tot of the drink, also complained of stomach problems and was rushed to the Saint Martin De Porres Hospital at Eikwe, where he died.

He said the owner of the drinking bar, Mr Ollu, and the wife, who sold the akpeteshie to the three men, had reported at the Aiyinasi police station.

Roused with fury, the youth of Aiyinasi besieged the police station to lynch the owner of the bar but were prevented by the police.

The Police later referred the couple to the Esiama police station, where they were detained pending further investigations.

ALSO READ  MOMO Tax: MTN, others to cut momo transfer charge by 25%
AMA GHANA is not responsible for the reportage or opinions of contributors published on the website.