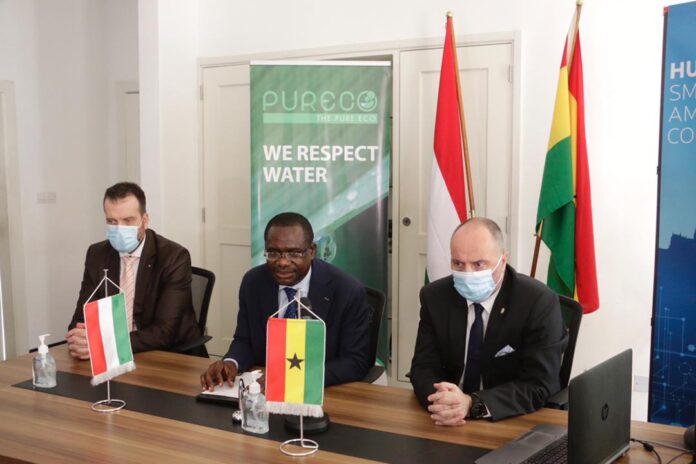 The Jospong Group of Companies (JGC), has signed a contract worth 50 million Euro with the Hungary government to construct a Waste Water Treatment Plant (WWTP) in three regions.

The WWTP would be sited at Takoradi in the Western Region, Tamale in the Northern Region, and Kumasi in the Ashanti Region.

Even before the signing of the contract, JGC had begun work on a WWTP in Kumasi in the Ashanti region which is near completion.

Addressing journalists at the signing ceremony which took place at the Embassy of Hungary in Accra yesterday, Dr. Siaw Agyepong said the contract is expected to be executed within 15 months.

He added that, apart from the Kumasi WWTP which was near completion, a lot of attention is being given to the two remaining plants as measures have been put in place to ensure that they are completed as scheduled due to the exigencies of the time.

“The country is being blessed with the relationship between Ghana and Hungary with initiatives aimed at solving the sanitation challenges of the country. These plants were needed as at yesterday and therefore we have put in all the resources needed to ensure that we execute the contract on schedule to bring some relief to the people living in and around the location,” Dr. Agyepong noted.

Touching on the reason why Hungary is investing in this project, the Hungarian Ambassador to Ghana, Andras Szabo noted that the Ghana- Hungarian relationship dated some five years ago and since water and sanitation is dear to Hungary it was not a fluke that the relationship has yielded this remarkable feat.

He said that the construction of the waste treatment plant means Ghana was in the process of achieving the SDG goal 6 and was hopeful that the relationship would grow bigger and yield greater gains going forward.

The Director of Sanitation at the Ministry of Water and Sanitation, Ing. Anthony Mensah who represented the Minister-designate, Cecilia Abena Daapa indicated that the contract was initiated by a Hungarian company, Pureco Consortium who are vested in the fields of drinking water purification, communal and industrial wastewater, and landfill leachate.

“It is our belief that with the expertise of Pureco this contract would be executed with the greatest professionalism and the plants would meet global standards”.

The project is being funded by the Exim Bank of Hungary.