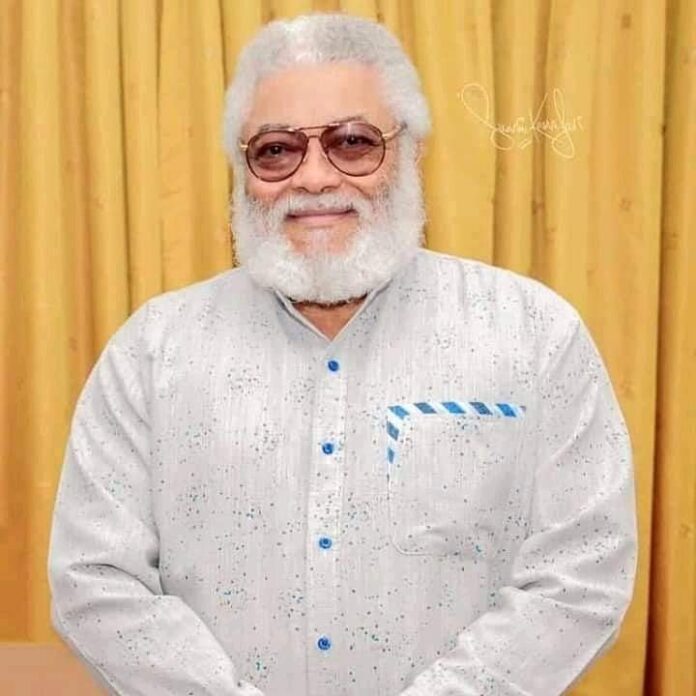 I was taken aback on 29th September 2020 when after paying my condolences and expressing my experiential emotions of what a toll the passing of your dear mother could have had on you despite your old age, you told me that: “Chief, it is good it happened now. Chief you people never knew. Two or three years ago I was in bad shape with my health and I feared I would go before her.

At least I can now see her off.” I thought this was just one of the usual conversations between friends. With hindsight, I now realize that my dear and respected former PNDC Chairman and former President Emeritus Flt. Lt. Jerry John Rawlings was indeed giving us notice of his impending exit from his earthly assignments after the burial of his dear mother and bidding us goodbye.

After the interment of his dear mother on 24th October 2020 he was compelled by affairs of state to truncate his period of rest to hold a series of mediation sessions with me, then the Special Prosecutor, in his Office in Accra on 27th, 28th, and 29th October 2020. The late former President Emeritus Rawlings adjourned the first session to the next day, the 28th and promised we would have lunch together. He kept his word and invited us to have lunch with him, adding that: “Chief” referring to me, “If you do not eat this lunch, I have arranged for us I will not be happy”. I reluctantly, unmasked and helped myself to lunch with the Great Leader. Others were around for the lunch including his sister Mrs. Judy John Nkansah. With hindsight, was this also in the nature of the last lunch/supper you had arranged in anticipation of your impending ancestral journey? We saw each other in his office briefly the next day, the 29th and he was all hope and assurance that justice and equity for the Ghana was going to result from his mediation efforts on the 30th, the next day.

We could not meet in a face-to-face interaction again because contrary to our agreed expectations I had been compelled to execute one of the teachings of our revolutionary struggle – positive defiance without having warned him about my intentions to avoid any breakdown in any prospect of continuing mediation. I was not exhibiting the skills of being good at playing chess, as I am told you surmised, Comrade Rawlings. I was dead serious to be a loyal, faithful, and true revolutionary comrade serving the interest of the ordinary people of this country for whom you led us to render selfless service during our long years together as comrades and brothers.

I heard the news of your admission at the Korle Bu Teaching Hospital on 4th November 2020. Then on the morning of 12th November 2020 somehow and intuitively, I got apprehensive and tried to find out how well you were doing. The prognosis was not gloomy. Then at 10:15 am I received by telephone the shocking and sad news that Ghanaians were yet to hear, from the United Kingdom, while I was in a scheduled meeting in my then Office. My mobile phones started ringing. “Is what I am hearing about former President Rawlings death true? Is it true….? Is it true…?”. My pretense of appearing self-composed despite the shocking and saddening news of your sudden demise to our ancestors could no longer continue during the meeting. I still cannot believe that you have left us, your comrades, so suddenly and put the whole nation in shock and despair.

The handing over of power by an African leader after two four-year terms under a Constitutional regime in Africa which you accomplished is a notable event in the political history of Ghana and Africa. Not all who have been Presidents or Heads of State have been of equal merit, or of at least equal importance. Presidents or Heads of State, like other men, vary in their importance on their generations and history. Some even in their lifetime never raised a ripple on the surface of politics and whose names are now forgotten by all but students of their period. Comrade Rawlings, you are one of those rare gems of this land who will never pass from the minds of men, but will live in their hearts, so long as Ghana endures because of the great qualities of your life.

His indomitable courage, all pervasive-humanity, and love for freedom for every Ghanaian are the qualities of our Great Leader for two decades as a revolutionary leader, and Constitutionally elected President under the 1992 Constitution he birthed that will forever make him to remain the most famous son of our homeland Ghana. He was the Head of State of four Governments which encompassed members of all the political persuasions of this country who were willing to serve under him and never was the nation’s trust in a man most amply justified. One such man who served under him as a matter of indisputable fact from an opposing political persuasion succeeded him immediately as President of Ghana on 7th January 2001. Historians in the future will analyze his strategy and tactics, and point, no doubt to his mistakes.

But we who lived through those days and served under him have this advantage over the historians of the future: that we can testify to the inspiration we received from his splendid courage, integrity, high moral character, and his matchless charisma and eloquence. In the line of Ghanaian and African statesmen who have graced our political history in my adult life, none has rendered such incomparable service, not only to his country but to the Pan Africanist movement, the African liberation struggle, the African continent, in general, and the world at large. None has striven so mightily in the sincere defence of truth and justice, and none has done more to uphold the standards of our national honour free from greed and corruption. Sure! Jerry John Rawlings was a hard taskmaster, but he was tolerant and magnanimous. He was the sort of man who drew the best out of all his subordinates, each of whom was proud to serve him to the utmost capacity. Even the traitors who once claimed to be his comrades who hurt him most unjustifiably before his demise attest in their traitorous books to his qualities as a statesman and a leader to whom they and the nation owe gratitude.

At this solemn and trying moment of grief and mourning my compassion and sympathy go out to his Consort and widow, the indefatigable former First Lady and founder of the 31st December Women’s Movement, and co-founder of the National Democratic Congress (NDC) in 1992, Nana Konadu Agyeman-Rawlings, who stood by our departed Great Leader, in rain or shine. My heart goes out to that valiant woman, with famous blood of Ashanti royalty in her veins, who sustained the former Chairman and former President through all his travails and problems and brought up with their charm and beauty the three daughters and a son who mourn their Great father to-day. May the Holy Trinity in our Catholic faith grant her and her children strength to bear their sorrow.

We shared the one Catholic faith and at this sad and solemn moment, I cannot find words in which to bid you goodbye till the resurrection. I am only left to say: Lord grant eternal rest to your son, Jerry John, and let perpetual light shine upon him. O Lord hear my prayer and let my cry come to you. May he rest in peace. Amen!