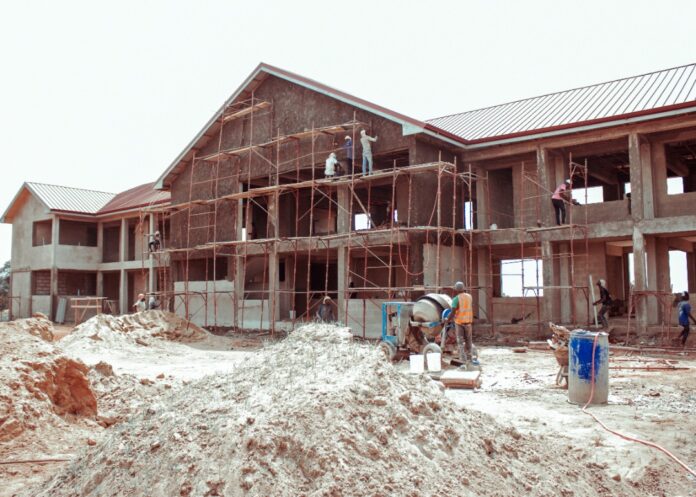 On January 29th, 2021, a group of military personnel, pressmen, and Mr. Alex Kweku Tetteh, the president of Citizens Eye Ghana (CITEG) paid a working visit to an ongoing building project at the Southern Command, Accra.

Major Belinda Amearteifio, Public Relations Officer, Southern Command speaking on behalf of GOC, Brig. Gen. Abraham Nsiah Yeboah indicated that the building will serve as a big relief to the command when completed.

According to her, the command is been dumfounded with inadequate facilities to accommodate personnel outside Accra whenever in Accra for official duties.

“GOC in a bid to alleviate this stress personnel have to go through when in Accra for official duties initiated this project”, she said.

The Gh¢ 3 million facility project which is expected to be commissioned in a few months consists of 96 bedrooms, a conference room, dining hall, and washroom.

Adding that, the government of Ghana is making effort to address the accommodation challenge hence GOC in its little ways contributing to obsess the effort made by the government to address facility challenges in the various barracks in the country.

On maintenance, she assured that the facility will be well kept and put to good use since the barracks undertake regular barrack inspection.

“The barracks has a regular barrack inspection which compels personnel to always keep their surroundings clean and maintain their equipment and other things in their custody safe”, she said.

She seized the opportunity to entreat Ghanaians to assist and support various barracks in any little way they can.

“Once a soldier has a comfortable place to stay, it creates a conducive environment for him to effectively carry out his constitutionally mandated duty of providing security for the nation.”

Mr. Alex Kweku Tetteh, the president of Citizens Eye Ghana (CITEG) in an interview with the pressmen applauded the GOC for using his office to undertake such a laudable initiative to assist the country.

According to him, “he has never heard nor seen in this country that a solider has used his own money to build a facility for his colleagues whilst in office”.

He said such a great initiative by a soldier must be commended by the government.

He also seized the opportunity to call on every government appointee in one or the other to do something to assist the society.

“What Brig. Gen. Abraham did is beyond imagination and must be commended by the government. It must not be the government or the president always, rather government appointees too, so I would like to plead with heads of institutions in this country to at least do something in the society as a way of giving back to the society, by so doing Ghana will be the best place ever to live”, he humbly appealed.