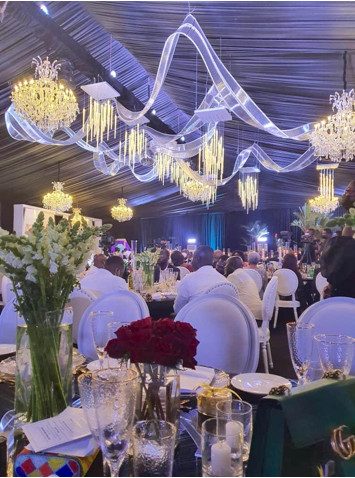 “Fellow Ghanaians, good evening.
I address you this evening with a heavier heart than usual on the matter of the coronavirus or Covid-19. By the time I am through, I hope you will find places in your hearts to “fama Nyame” and forgive me for my role in spreading the virus. I must also acknowledge the sermon of the head pastor of the Alabaster Church, and with all humility, I must admit, though painful, that he has a valid point.
Due to my overzealousness to show the NDC that fair or foul, I won the 2020 presidential elections, against better judgment, I allowed friends and family to put up a super victory bash for me in early January 2021. As parties go, it was one of the most ostentatious and extravagant ever witnessed in our dear country. As you can imagine, money was of no object and so we splashed, binged and splurged!
There were food delicacies, some even out of season, and rivers of booze and other beverage types. The music was super and we even flew in a musician from the UK who flew back to his base immediately his performance was over – this was significant and I will tell you why later.
The guest list was a who-is-who of those who helped me in one way or the other to squeak through, what was most certainly a difficult election. Business people, civil and public servants, media people, religious leaders and more, were all there. In fact, the mother of the lady who made it possible for me to claim victory was an honoured guest – so sorry for the dear old lady, she was also infected. I cannot list the names of all those who were there, but let me just say, they were there and a jolly good time was had by all! We danced, hugged with hardly any concern for social distancing or face masks. Ours was to let the NDC know that “ser mo so koraa na me yer no more”!
Fellow Ghanaians, what I did not factor in was that beyond me taunting the NDC, was the law of karma waiting. Only a day or two after the bash, I started getting reports that many of the guests who had been boogying the night away with me on that day were down with some inexplicable symptoms, later to be confirmed as Covid-19 infections. Some were so serious as to be hospitalized, including my own sibling, his wife and the mother of the lady who facilitated my 2020 election win, some advertising executives and others. Close to forty individuals were infected. As to those we could not identify or trace, heaven help us, because they have vanished into the populace and who knows the rate of spread they are causing? One person we are sure of, is the musician from the UK, because when he arrived back home he was tested immediately and the result was negative. And he arrived just in time to get his vaccination. Lucky chap!
Fellow countrymen and women, from the above, you can see I have been complicit, reckless and negligent, issues that the NDC could have used to start impeachment proceedings against me, but lucky me, since they do not recognize my claim to the presidency, I get away freeeeee! I am also sure that my people hearing the petition in the supreme court would ensure that I remain in office and so, “min suro hoo”!
Now that leaves the rest of you to add this transgression to the many you have already tolerated so I get to enjoy myself at taxpayer expense without let or hindrance. And here, I must refer you to the sermon of the head pastor of Alabaster Church I mentioned earlier. He provides details of how my inordinate desire to have my way in Election 2020, might have contributed to the spread of Covid-19 in Ghana. I know many men and women of God have lost credibility, but this is one with integrity.
Having seen the virulence of this damn Covid-19 so close to my own home, I have decided to ban all inaugural activities with immediate effect. And on that note, I say good night.”

Back to reality
Of course, the above is only my wishful thinking or, well, figment of my imagination running riot, but it comes from a real reality show called “Inauguration Ball” or “Victory Party”. The reality of the above has been trending for a while now, and I kept hoping that they would square up with Ghanaians and tell us the truth. I got to know about the Covid-19 infections a few days after the bash. Some friends, former friends and familiar names were mentioned to me as having been struck down by corona virus after attending the inaugural ball. It was so scary. I was so concerned that, I added to the conclusion of a commentary I was working on, the following:
“Tellingly, amidst all the gloom over Ghana, last Friday, Mr. Akufo-Addo and his cronies settled to some of the most ostentatious and extravagant parties to be held in recent times. Fiddling while Rome burned indeed.”
Vindicated yet again, I am not gloating. How can I, when lives are involved? Due to the attempt at sweeping it under the carpet, a little rumour industry has grown up around it and the grapevine is sizzling! For example, originally, I heard 40 people had been infected but now I hear 80 and above. I also hear that the poor fashion designer who did the clothes for the “Hollywood wives” was suspected as the possible culprit, but when she was tested, the result was negative. Another rumour points in the direction of a relation who flew in from Mozambique and has since died on returning to his place of abode in the Mozambican capital. Ghanaians deserve to know the truth! The salutation, “Fellow Ghanaians” has become the butt of jokes and goes to prove yet again, that leadership based on honesty, pays far more and longer lasting dividend than leadership based on sophistry, which only breeds cynicism. So what really happened? Let us have the official statement! I understand they now have a Squealer at the government house. Come on, earn your keep!