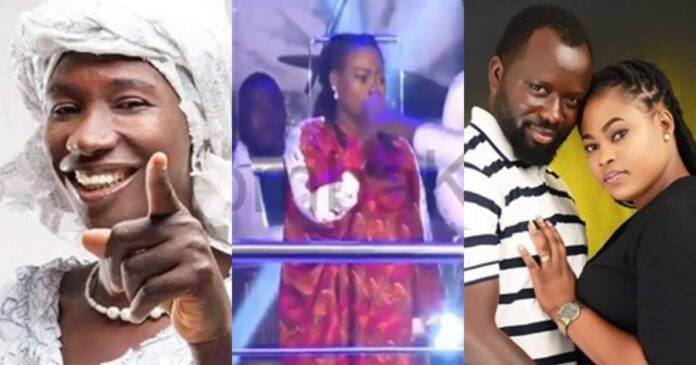 Indeed the hypocrisy of the Ghanaian Gospel fraternity is in full glare after Joyce Blessing was humiliated by Osofo Cecilia Marfo.

It was Sunday morning, on my way to church when I had a strange call. The voice at the other end without waiting to exchange any pleasantries just went on to ask upon my answering the phone “Oh, what is wrong with that woman?”

I solemnly asked; “who is this? What is it going on?” There was no reply and the line went dead. After about an hour, I started receiving phone calls and that gave me an inclination on why the unknown caller had wondered what was “wrong with that woman”. Cecilia Marfo had done it again. The so-called Prophetess had apparently been consumed by the Holy Spirit who “directed” her to snatch a microphone from the hands of renowned gospel musician, Joyce Blessing and prophesy unto her to go back to her estranged husband. All in the full glare of an audience who were being Ministered to by Joyce Blessing and captured on camera. What a mess!

I am in tears while putting this piece together because I have to come to realize how hypocritical some Ghanaians are.

One would have thought that by now the ‘Social Media Prophetess’ would have been all over Facebook condemning the diabolic act of Cecilia Marfo.

Because this shameful act has to do with Joyce Blessing, some unscrupulous gentiles, including some of her colleagues from the Gospel industry are justifying it, saying Cecilia Marfo might have indeed been sent by God.

‘Christofour’ indeed! The God above whom we all claim to worship has seen all and will surely deal with such haters. I am deeply saddened and traumatized by what’s happening to our gospel industry as people who should know better are keeping mute and watching wolves in sheep skin destroy key players

I think it is about time Women in Gospel comes out to defend their people. Empress Gifty Adoryeand Bro. Sammy have all been through this humiliation.

Why are we keeping mute and allowing some few people to destroy our industry? It is time to call a spade a spade.

Evangelist Diana Asamoah came out to say the devilish things going on in our industry, sited what Osofo Cecilia Marfo did to Joyce Blessingand condemned the act. Yet, one Anita Afriyie, whom I’ve known to not like Joyce Blessing from time immemorial, took to her YouTube account to trash Diana Asamoah while throwing her weight behind Cecilia Marfo.

For over twenty years of backbiting, gossiping, and hatred which has divided rather than unite them in the name of Christianity, I am certain there is something missing among gospel artistes.

Veteran and gospel legends such as Tagoe Sisters, Prof. Kofi Abraham, Wofa Asomani, YABS, Comfort Annor, Elder Kwasi Mireku and many others did not only churn out music that touches and changes lives but have also proven to be God’s ambassadors yet that is a far cry from what we see portrayed by today’s Gospel musicians.

The hatred for one another is such that some even cringe whenever they meet or see each other during programmes or share common platforms in the name of God.

Never in my life as a broadcast journalist have I experienced such an awful exhibition of character by some “men and women of God” who are supposed to live Christ-like lives to promote love and unity among Christians and non-Christians alike.

The Gospel industry needs some sanity and this can happen only when artistes see the need to encourage and support each other to deliver in the name of God rather than try to bring each other down.

I do believe that through the blood of Jesus Christ there would be cleansing in the Ghana Gospel Music Industry.