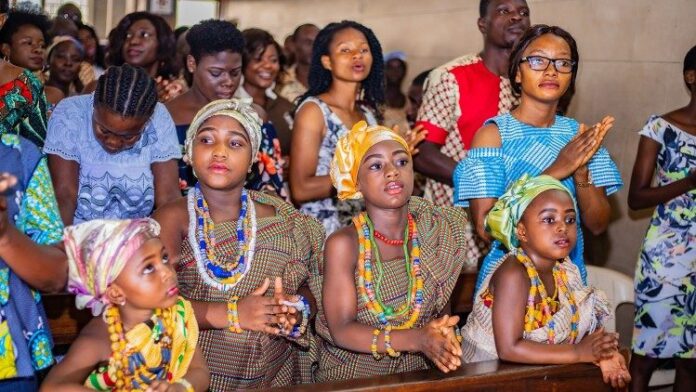 Today, it can boldly be said that we are gradually heading towards a situation where nothing would really define who a Ghanaian is. Just because we shy away from our Identity and adopt those of other people.

As years go by, we are daily losing our Identity as a people. We have allowed and decided willingly that instead of being proud of what defines us as Ghanaians, we would rather adopt the culture and identity of the West (Western European countries). We have gladly accepted and adopted every aspect of their lives.

When it comes to food, Ghana is known for its fufu, akpele, waakye, ampesi, tuozafi, etc. Beverages like; sobolo, elowonyo, fula, just to mention a few. Its fugu, batakali,kente, etc. in terms of clothing. Twi, Ewe, Ga, Dagbani, Nzema, etc. when it comes to its language. Above all these, as a people, we have our values and how we believe a civilised society should be.

It is sad and unfortunate  that the beautiful and elegant Ghanaian clothing are today seen as unofficial, meanwhile, those that Identify other people are rather adopted and seen as official. How did the Ghanaian come to think so low of itself, how?. How did the Ghanaian willingly put itself under such mental slavery. The Ghanaian cannot wear its beautiful and hand-woven Batakali to a job interview, he/she is forced to wear a suit in our hot weather conditions or would be refused the job.

It is funny how Universities in this country who ordinarily should know better and champion the fight against the nation losing its identity rather forces its students to wear shirt and tie as an official dress to class, because they see the Ghanaian clothing as unofficial. We are so okay with promoting the identity of the Western man and shy away for ours. As a medical student, I am supposed to wear shirt and tie, clothing of the Western man to class Monday to Friday. And I ask a simple question, what is wrong with wearing my African wear to class, what is wrong with that?

I am seen as old school and teased as not a  ‘current person’ when seen eating my healthy ampesi and kotomire ‘abom’. The Ghanaian would rather I eat pizza, shawarma, noodles, etc. The Ghanaian would today prefer smoothies and other foreign beverages but we are now running to sobolo in the era of covid-19. Our food have proven to very nutritious and immune boosters but yet the Ghanaian would sadly prefer those of the Western man.

Every society has its core values it believes in, these are the values that shape their way of life. Today  the young has lost respect for the elderly, because of politics for example, a young man can woefully insult an elderly in society just because of opposing views. Our forefathers believed in a system of marriage where a young man finds a beautiful woman to spend the rest of their live together. Today, the West is telling us differently, they tell us is okay for a man to marry another man and woman, another woman. But sadly we seem to be okay with that as a society. Our ‘leaders’ have allowed them to even establish an office on our land. Meanwhile, these same Western countries have stood and continues to stand against polygamy. Why can’t we protect our Identity jealously as they protect theirs.

If these Western countries believe in a man marrying his fellow man and woman, her fellow, let them. That is not the values of the Ghanaian people. Why are our ‘leaders’ allowing the West to impose such strange and foreign act on our land. Why are religious and other institutions quiet about the establishment of LGBTQ office on our land?.

As Ghanaian people, we must uphold our values and jealously protect our Identity. We can not as a sovereign nation continue to willingly allow the West to impose their identity on us. We cannot accept this LGBTQ way of life on our land, our Chiefs cannot sit and watch for this to happen.