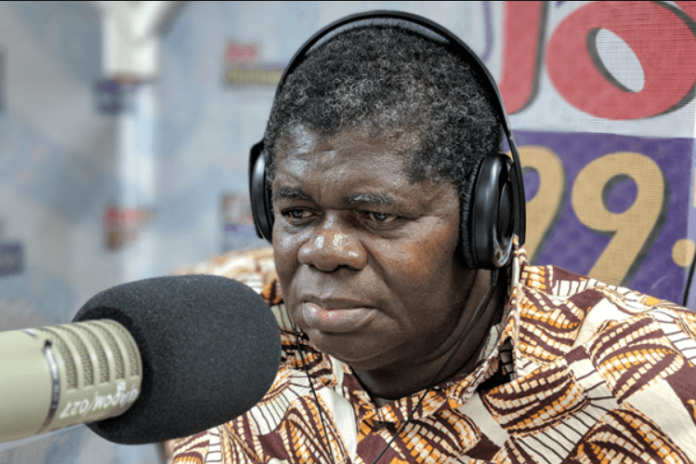 Veteran Ghanaian movie personality, Psalm Adjeteyfio popularly known in showbiz circles as T.T. has bounced back firmly on his feet after suffering a critical heart disease for years.

T.T, became a household name after starring as the lead character in the popular TV series, Taxi Driver in the late 90s to early 200s.

The show made massive waves in the good old days. With this, got his major breakthrough and later starred in movies such as Jamestown Fisherman, A stab in the Dark, among others.

In 2018, Psalm Adjetefio went public about his failing health condition. He disclosed that the situation has compelled him to fall on some past students who he says have come from many parts of the world to assist him Psalm Adjetefio revealed that at a point, he was taking about 19 tablets on a daily basis but he is currently taking between 7 to 9 tablets on a daily basis.

He required financial support from the public to undergo heart surgery else the worst may happen.

T. T said his medical problems started when he was diagnosed with an enlarged heart, leading to swollen feet.

He added that the condition later evolved into a critical heart disease that needs immediate attention else he is doomed.

He said most of his friends ignored his calls and blocked his number because of his illness.

Well, the legend, in a recent interview with Accra-based Max TV monitored by GistAfrica, revealed to the world that he is currently doing. He said a Good Samaritan helped him bounce back to good health.

According to Mr. Psalm, he was on a verge of selling his house to help him cater for his sickness so interested persons were visiting him for negotiation.

ALSO READ  Marking the end of an Era: How OPEC Secretary-General Barkindo served with distinction

Fortunately, one of the interested buyers was a Pastor. The Pastor immediately recognised him to be T.T of Taxi Driverfame.

“After the man got to know me, he introduced himself to me that he is a Pastor so I should tell him each and every ordeal I am facing. I told him, I am very sick and need to be at the hospital but I don’t have money and he said never can he allow me to rot away in my in this condition, you’re not that old.

“He started making calls and appealed to take a picture with me claiming he belongs to a platform that helps the less fortunate and promised to show up the following morning to send me to the hospital as he left with 200 cedis to spend on that day.

“True to his word, Pastor Elvis showed up the following morning to send me to a hospital at La Bawalashie a clinic at East Legon and so from there I was receiving treatment and it got to some time I wasn’t seeing the Pastor any longer like how he used to visit me in the hospital often.