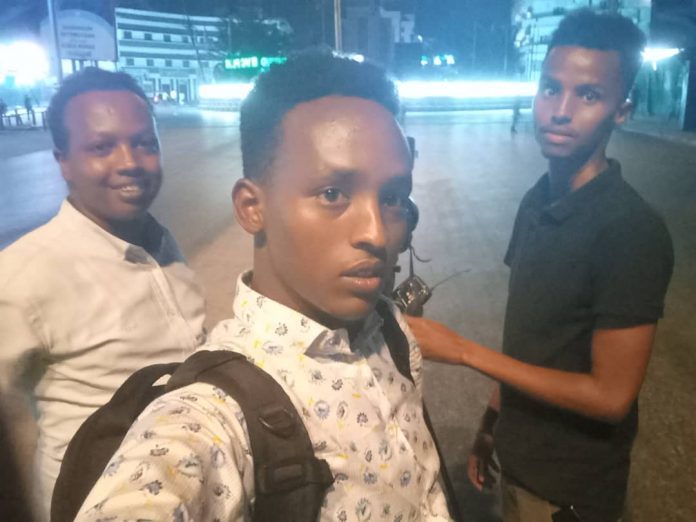 MOGADISHU, Somalia, 20 February 2021 – Somali Journalists Syndicate (SJS) strongly condemns the arbitrary arrests, denial of access, threats of shooting, and confiscation of equipment against journalists by the Somali police force on Thursday night 18 February, and Friday 19 February in Mogadishu in the latest of a series of targeted attacks against media professionals.

On Thursday night 18 February, about 11pm, the police unit known as ‘Haramcad’ [Cheetah] detained journalist Mohamed Ibrahim Bulbul, the Information and Human Rights Secretary of SJS who also covers for Universal TV and two other journalists: Mahad Hassan Abdi and Zakariye Ahmed Muse. The three journalists, who were on duty to report the development of police deployment ahead of the Friday’s opposition rally in the capital, were stopped at gunpoint, their equipment confiscated and detained at KM4 junction by the police. They were held at an open place in KM4 until past midnight and were only released without charges after SJS intervened the situation and the equipment was returned.

In the morning of Friday 19 February, Haramcad police unit stopped and detained four journalists: Farhan Mohamed Hussein (Radio Kulmiye), Fu’ad Mohamed Mohamud (Radio Risaala), Mohamed Yahye Jinow (free-lancer with Dalka TV) and Abdinasir Yusuf Socdal (free-lancer) while covering an opposition protest in Shangani, near Daljirka Dahson Square, where opposition presidential candidates planned to hold an anti-government rally. After forcibly dispersing the protesters, the armed police turned to the journalists and took the four reporters to Shangani police station where they were held and were freed later in the day without charges.

In several locations in the capital, armed police stopped, intimidated with the threat of shooting and denied access of journalists to the sites of the Friday protests. Journalists from various media houses told SJS that they were blocked from main roads to reach the places of opposition protests. Some journalists were forced to trek in a long distance – sometimes taking dangerous routes- to avoid being detained by the police. Some even said they went into hiding and were not able to reach their media stations until late on Friday because “police would target every journalist they could find on the street”.

SJS expresses its concern about the increased violation against the press by the state security forces with impunity. Such violations will not end unless officers responsible are held accountable.

“We strongly condemn the police tactics to target journalists covering opposition protests. Detaining our union official Mohamed Bulbul and six other journalists in less than 24 hours would only show about the worsening track record of Somali security forces against independent press,” Abdalle Ahmed Mumin, the secretary-general of Somali Journalists Syndicate (SJS) said “Arresting journalists, confiscating their equipment, intimidating at gunpoint and denying them to have access, just because the journalists are reporting about protests that the government does not want, is a blatant violation against freedom of the press and a violation of the Constitution and all international laws. Any officer responsible for these acts must be held accountable.”