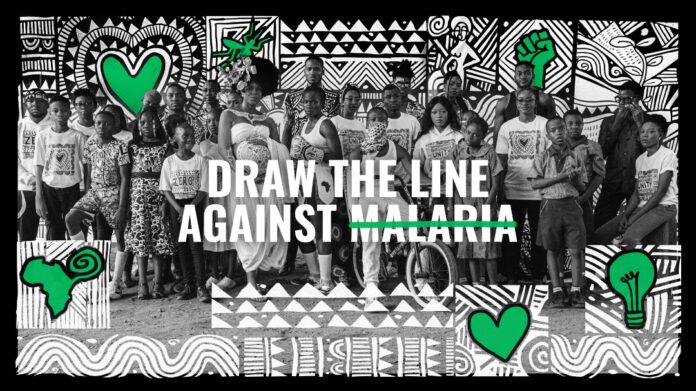 24 February 2021/London: Dentsu international has partnered with global NGO Malaria No More UK to launch ‘Draw The Line Against Malaria’. The star-studded creative campaign invites youth from across Africa and the globe to join the movement to end the world’s oldest deadliest disease.

The global integrated campaign is the latest in a three-year pro bono partnership involving creative and media agencies from across the dentsu international network, aimed at ending a disease that kills a child every two minutes.

The ground-breaking campaign taps into a cultural moment where new generations are claiming their futures back from this deadly disease, combining a digital platform, activation, and powerful film.

The stars are joined by global artist Láolú Senbanjo, and a team of malaria community champions who feature in different scenes to tell the human story of malaria and the devastating impact it has on their education, employment, health and prospects. With 74% of Africans now aged under 35, the youth contingent are powerful agents of change and the campaign represents a rallying cry for them to step up action in the fight against malaria.

At the heart of the campaign is a fresh new universal visual language made up of lines, symbols and patterns, the ‘Muundo’ created by acclaimed Nigerian artist, activist, and human rights lawyer, Láolú Sebanjo.

The language, is a beautiful, eye-catching visual representation of the actions that are needed to end malaria once and for all within a generation, from cutting-edge technology and innovations to increased investment and bold political actions.

The ‘Muundo’ has been designed to inspire young people to show their support for the malaria fight. Youth across cultures and continents are invited to add their unique line to the Zero Malaria website: www.zeromalaria.org and contribute to a collective message asking world leaders to step up the fight against malaria.

Each line will create a unique piece of art that is added to a globally crowdsourced mural. The artwork will be presented to world leaders as a collective message of solidarity powered by the people at the Malaria and NTDs Summit on 24 June 2021, on the eve of the Commonwealth Heads of Government Meeting in Kigali, Rwanda. The Summit is a milestone moment in the malaria fight and enabler of game changing political decisions including delivering the commitment to halve malaria across the Commonwealth by 2023.

Andrew Ackah, CEO Dentsu Ghana says: “The campaign is part of dentsu international’s ongoing commitment to Malaria No More UK, a pro bono partnership that began in 2017, and part of dentsu’s commitment to use the power of media and advertising to drive delivery of the UN Sustainable Development Goals. What we are looking at is a Malaria-free future, where our children and generations unborn can be assured of safety from one of the world’s deadliest diseases that kills a child every two minutes.”

“Currently, all the attention seems to have gone to COVID-19 but we need to ‘Draw The Line Against Malaria’ and we hope that this partnership will inspire a generation to unite and take action to end malaria for good,” he added.

Lilies Njanga, Africa Director at Malaria No More UK says: “As young people face unprecedented new challenges around employment and health due to the pandemic, we must protect the fight against malaria. Africa’s youth are too smart and too strong to let malaria steal their futures. The Kigali Summit will be a critical moment to galvanise renewed action to tackle malaria in the face of COVID-19 challenges. Never has it been more urgent to protect communities and to build a safer world for all. It’s in our hands.”

ALSO READ  Ayawaso Cerebral Palsy Football Club President optimistic about the Sport in Ghana
AMA GHANA is not responsible for the reportage or opinions of contributors published on the website.