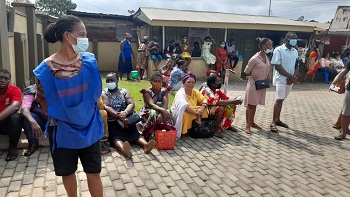 Traders at the Kumasi Central Market on Tuesday stormed the premises of Otec FM, a private radio station, to register their displeasure at Kumasi Metropolitan Assembly (KMA) over their eviction.

The traders, according to them, have their stalls fenced on Tuesday, March 9, 2021, and prevented entry, without prior notice, a situation they said amount to ‘gross disrespect’.

They have thus threatened to embark on a naked demonstration if the assembly fails to relocate them and the MCE, Hon Osei Assibey Antwi, not remove from office.

The traders numbering about 500, speaking to Otec News invoked curses on the MCE, describing him as “corrupt and untruthful person” who does not fit to head the assembly.

Appealing to the Asantehene, Otumfuo Osei Tutu II, to intervene, they said they have all their wares locked up, making it difficult “to feed themselves today”.

According to them, the assembly, led by Hon Osei Assibey, in an agreed meeting told them to transfer them to Abinkyi and Race Course markets, for the start of the second phase of the construction of the redevelopment of the Kumasi Kejetia Project.

“There are no spaces at both markets and even that area cannot contain all of us. We woke up this morning to find our area closed, without any information. How do they treat us like us”, they asked.

“Hon Osei Assibey is an untruthful and corrupt official, God will punish him severely for selling our stores at the Kejetia meant for us. He should be removed right away,” they angrily curse the MCE.

“Until the assembly finds us a convenient location to transact our businesses, they will find our nakedness all day to register our displeasure against the Osei Assibey corrupt led assembly”, they warned.