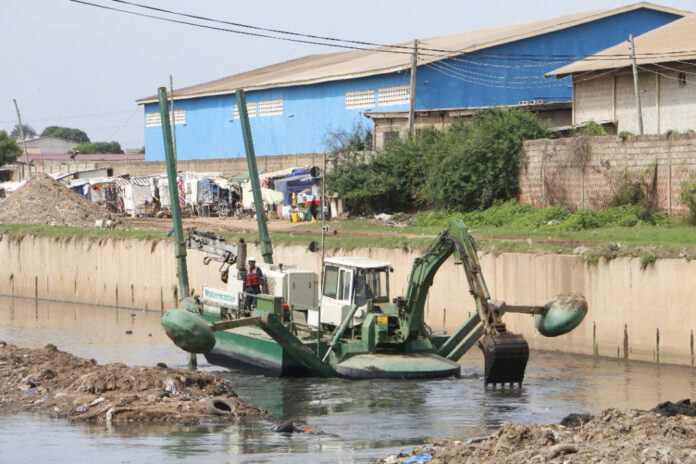 Historically, a few very large European companies have dominated the global dredging industry. Now a new challenge to the European domination has emerged from China. A Chinese Dredging Company, namely, China Harbour Engineering Company (CHEC) has been very active in Africa and Asia.

However, it falls into a category of its own, where state support is quite apparent. There are a few other notable regional dredging companies like the National Marine Dredging Company (NMDC) of Abu Dhabi and Penta–Ocean of Japan.

However, these dredging companies have not yet really positioned themselves as an alternative to the Dutch companies. Their sphere of influence and reach has been very limited although they have been in existence for several decades.

Shift Noticed: In recent times, NMDC has shown a small shift. It has scaled-up its operations and could become a dominant player in the Middle East and adjoining regions in times to come if it sustains the new trend. Roots of Dutch and European Domination of Dredging Industry Historical evidence indicate that Dredging activities were undertaken as far back as 2500 years ago in China and even earlier in Egypt.

Holland is a low-lying country and has been battling the sea for ages. Dutch Marine ingenuity and grit has enabled the Netherlands to prevail so far in its near-continuous battle with the sea. In the sixteenth and seventeenth centuries, Holland became the richest nation in the world.

This success was partially due to its ability to protect as well as expand its lands despite the severe and continuous challenge from the sea. Dredging technology and expertise which emerged from Holland became a foundation of the industry. Over time, Dutch and Belgian interests created a near-monopoly of Europeans in the industry to the exclusion of all others.

The prevailing monopolistic environment reduced the initiative and innovations from other parts of the Globe. Former Practices not sustainable in this era In the modern era, with the fast diffusion of technology and know-how, this former model has become less sustainable.

Other regions are developing their own expertise. Is the dredging market big enough for everyone? Most of the activities where Water is involved in some way or another requires dredging. Size of the Dredging Industry.
In 2019, the dredging market saw contracts worth about €5.2 Billion, excluding China and America.

The dredging activities are required in some form or another for:

i) Navigation: – To create depths at Harbors, Channels, or Inland Waterways for various navigational requirements.

ii) Desilting of Dams:-To build/enhance/maintain capacity for Storage of Water in Dams and other water bodies for potable or non-potable use.

vi) Land Reclamation: – Reclamation of land to fulfill the ever increasing demand for Housing and Urban infrastructures because of rapid urbanization of coastal cities.

Dredging is emerging as major tool for mitigating the effects of Global Warming and Climate change. Here are few examples:

a) Oil Platforms and Oil Rigs are gradually giving way to “Artificial Islands” for the purpose.

g) Offshore Mining of manganese and other valuable minerals.

h) To mitigate the threat of extinction to low lying countries and regions as a result of rising seas. This threat is very real for Bangladesh, Florida and Maldives for example.

Returns and Sustainability Return on investment (ROI) will depend on many factors, such as: a) Competition b) Financial Management of the Company c) Project Management Skills in general, the Gross Profit Margin (GP) of the Dredging industry is very commendable in comparison to other industries /sectors. An obvious exception would be the Software/ I.T industry where much higher margins are attainable!

The Industry is not constrained by demand in any way. The need for dredging will exist as long as Humans have any interface with Water, whatever that may be. Constraints: The Factors which negatively affect the industry include:

i) High Project Cost: – The High Cost of Dredging leads to avoidance of it by clients until a situation becomes beyond control especially in developing and poor countries.

ii) Dependency on Donor Funding: Most of the Poor countries and a large part of the developing world are heavily dependent on donor funds to carry out medium to large dredging projects.

iii) Prohibitive cost of Dredgers and related equipment: The cost of dredgers is prohibitive in many cases. A European Dredging company has recently acquired a Dredger from Europe at the cost which exceeds the GDP of some of the small countries!! iv) Non-availability of sufficiently trained and experienced dredge staff: The Cost of trained staff is extremely high for several reasons. One of them is the requirement of expatriates due to short supply or non-availability of competent and experienced staff.

The Dredging industry, including not just services, but also manufacturing, could become a major economic driver and employer in some countries and regions. It can also a major tool to mitigate the profound effect of climate change and to satisfy the ever-increasing need of Land for rapid urbanization.

It is not only desirable but necessary to bring down the cost elements in all aspects of the industry so clients can obtain dredging services at optimum unit cost. Last but not least, the cost of mobilization and demobilization of Dredgers from Europe or America to any region besides nearby regions can be expensive or even prohibitive and is one of the major cost factors in any given project.

Competent Regional Staff for Dredgers and Equipment Similarly, regional Maritime colleges and Training facilities can be sources of trained and competent staff. Not only would they reduce the dependence on expatriate staff in the short term but they could reduce or even eliminate the need of expatriates in the long run.

This would not only reduce the salary and administrative cost but also provide a channel for employment for the youth of a developing region. Why do we talk of regions and not individual countries? Dredging companies need a critical mass to provide world standards at a lower cost.

Below this critical mass, companies in the sector will be too small and fragmented. A Dredging company below a critical mass may not be able to acquire the right equipment, the right personnel, and other critical requirements due to lack of capital and reach in the market.
A space exists in some dredging markets, where small companies cannot effectively survive and/or provide optimum services, but via a regional company that has attained critical mass by way of adequate financials, equipment, and workforce to provide quality services at a cost much lower than European Companies.

The specific benefits to a regional company can be:

a) Strategic benefit of lower cost of mobilization/ demobilization, which is a very significant cost to the Client.

b) Employ local/ regional talent to reduce cost to the company of employees.

c) In certain regions and countries, local content has a preference.

d) The expertise, trained work force and consultants for each region are available from local pool.

The small companies who are too many could not pose any challenge to European companies, especially for larger projects. The vast Nigerian industry is dominated by Europeans to date and Nigerian Dredgers have been pushed to sand-winning activities. The only viable option for local players is regional domination.

The Domination of regional Companies of over European Companies in their respective regions – A pre-requisite To borrow a concept from the Airline Industry, a successful dredging company needs to aim for regional domination by following a “Hub and Spoke Strategy.”

The Dredging Company may have its headquarters or base at a major coastal city in the region. It could own a strategic fleet of Dredgers and Equipment, appropriate for the market size of the region. A pioneer from Bangladesh: A Bangladesh-based consortium of Western/IBC has exactly identified such a regional opportunity. The company has acquired 33 dredgers in the region in a remarkably short period. (Source – Dredge Wire, 4 Feb 2021 )

A shining example from West Africa:- DredgeMasters limited, with headquarters at Accra, Ghana, has in a short span of five years made its mark in Ghana and other regional West African countries. This company has a core fleet of Amphibious Dredgers and has a strategic partnership with international companies to augment its capabilities and reach. India has also recently reported in DredgeWire, Royal IHC of the Netherlands has just entered into an agreement for the first time to build large complicated hopper dredgers at an Indian shipyard in Cochin.

The above three examples are just illustrations. It’s not hard to find similar cases in other regions. For example, Ellicott Dredges of the USA has built dredges in Egypt with Arab Contractors for end-use in the Middle East region.

The above shift can get a further boost if the Government of the companies in the regions can support the concept through appropriate legislations, encouraging local and regional companies, and encouraging regional financial institutions to meet the need to support them proactively.

Other Significant Initiatives Dredging and Marine innovations www.dredgingmarineinnovations.com is one place where technical, financial, and Project Management skills are developed.

This a platform which brings experts, suppliers, contractors , consultants, service providers, subject matter experts and clients to meet at one place for their needs, requirements and advice. (Disclosures – The Author is associated with Dredge Masters Limited, Ghana as well as with Dredging and Marine Innovations.

Capt Ansar Ahmed Khan is a C-Suite Dredging and Marine Professional. He has worked in various capacities in India, Taiwan, Nigeria and Ghana over decades.

This article reflects solely the views and opinions of the author.