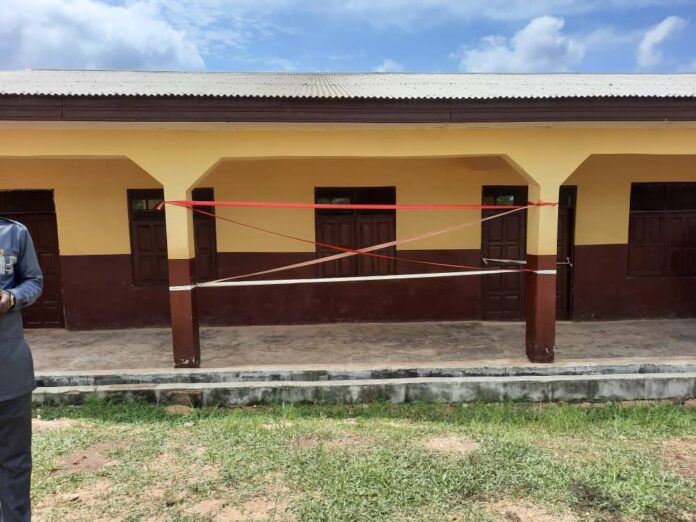 The people of Kramokrom a farming community in the Akrofuom District can now heave a sigh of relief. This follows the Commissioning of a three (3) unit classroom block by the District Chief Executive (DCE) Jonas Maurice Woode to replace the old dilapidated structure.

According to the DCE, education remains a topmost priority to him. He said Human resource development is key to the success of a country hence his resolve to promote education within the district.

He added that, even though the district is relatively young, they are working assiduously to make education accessible and also promote quality teaching and learning.

“To make education accessible and promote quality education, we will make sure all schools in the dilapidated state will be given a face-lift. We will also see to it that the living condition of teachers is improved”.

Mr. Woode furthered that, the school is strategically positioned to accommodate pupils from neighbouring communities who do not have Junior High School.

On the progress made so far, the DCE mentioned that hitherto, the Akrofuom district had only 3 schools out of the 35 existing schools benefiting from the government school feeding program but currently twenty- one (21) schools are benefitting from the program.

He also revealed that the Assembly has provided two thousand one hundred (2,100) desks and 41 teachers’ desks to schools within the district.

Hon. Jonas Woode advised the teachers and students to adhere to the maintenance culture and protect the facility to stand the test of time.

The District Director of Education Mr. Adu Abrokwah expressed his profound gratitude to the DCE for championing education in the district. He appealed to the DCE to send a message to President Nana Addo Danquah Akuffo Addo that since there is ‘cocoa roads’ then the incoming COCOBOD Boss should also build Cocoa teacher’s quarters for cocoa farming communities.

Odikro of Kramokrom Nana Baffour Awuah thanked the DCE for giving the Kramokrom School a new facelift. He appealed to him to come to their aid to support the building of the teachers’ quarters.

Nana Awuah took the advantage to put forward their grievances on other aspects of development such as roads, electricity, and also communication network that the community lacks.