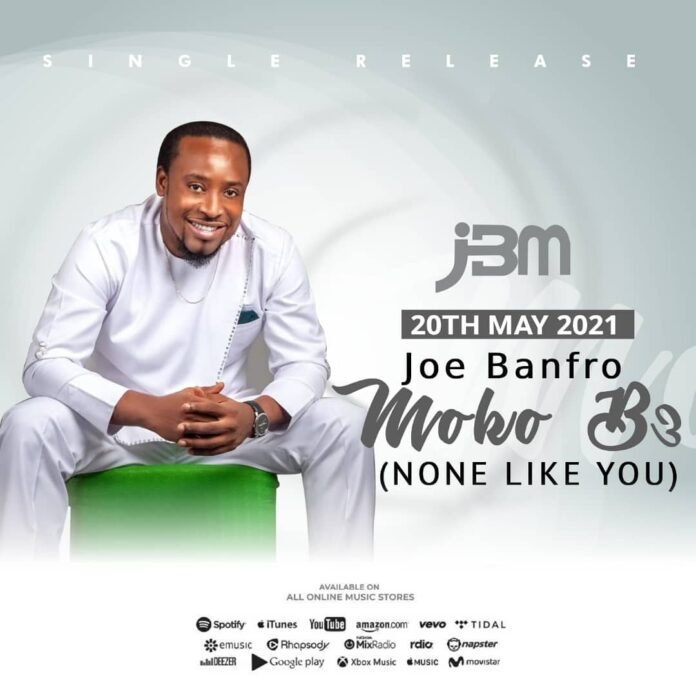 On May 20, a hit single was released by renowned international Praise and Worship Minister, Joe Banfro, and many can’t stop learning the lines of the new track.

The passion and gratitude which voiced out the emotions of Minister Joe Banfro makes people wonder ‘what’s the inspiration this time?’

As is well known of him, he loves to write stories around happenings in life and that aptly brings out the natural ministration of appreciation to God Almighty.

When caught up by Modern Ghana’s James Appiakorang to explain how ‘Moko B3’ came about, this is what he said:

“Moko B3 is an inspirational song of praise expressing the greatness of God for how my son Raphael survived even when health experts said he would die”.

Raphael Banfro son of Joe Banfro was born on 20th May prematurely same night unfortunately after his mother was induced due to low level of iron during her pregnancy.

He recounted that having been kept in the incubator for two months, the doctors called his wife and himself to see Raphael for the very last time as they thought ‘Raphael wasn’t gonna make it the next day from medical point of view because they had exhausted all they could do medically for his survival’.

This news he noted, rendered them helpless except with only one option; God.

“We called on God, he heard us and miraculously intervened”. He said with a cheerful grin.

Right there at the hospital, lyrics for ‘Moko B3’ began flowing amid joyful tears.

His son Raphael celebrated his birthday the very day the track was released.

Since the single track was released last week, online stores have been busy with many clicks on the song.

Minister Joe Banfro says ‘music is one powerful way of spreading the Gospel’ and ‘I am happy it is going far so far, because many need to hear of God’s power and greatness’.