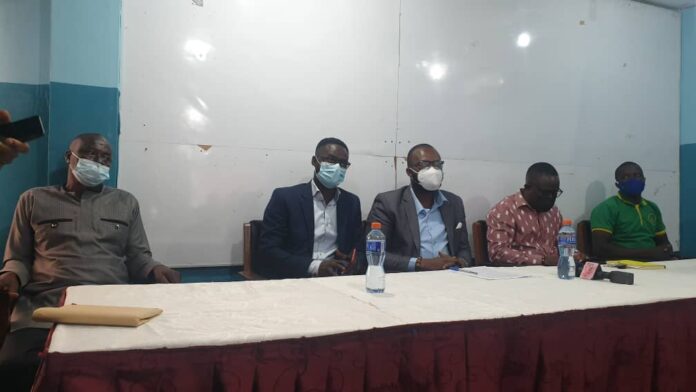 In the quest to stop illegal mining (galamsey) which is destroying the country’s water bodies and lands, the Alliance of Civil Society of Agriculture Ghana has urged the government to involve communities in the fight.

According to the group, the galamsey fight remains mere rhetoric without the involvement of community members and the government is not courageous to deal with the root causes, making it a joke.

Fresh evidence from the field in a short video documentary shown at the press conference on Thursday in Accra revealed the level of impunity in the fight against illegal mining.

The video further showed the rate of forest loss to illegal galamsey, destruction of precious and critical water sources for forest fringe communities and how the illegal miners have left huge trails of mud and toxic waste such as deadly mercury, poisoning water sources used by the local and vulnerable communities.

According to them, communities genuinely like to rise and support, but they live in fear and panic.

Mr. Anthony Morrison, who doubles as the CEO of Chamber Agribusiness Ghana and Chairman of Ghana Agriculture Skills Body, addressing the media said community members are willing to partner with the government and support to win this fight and they must be involved.

“The effects on water bodies are already burdening the Ghana Water Company in terms of water quality and treatment. Community members, particularly community groups like the Landscape management board in Juabeso and Sefwi are willing to partner with the government and rise to support, or interactions with the communities reveal a state of apathy and a culture of silence”.

“Historically, illegal gold miners’ presence on community land has threatened the health of isolated and forest fringe communities through spreading diseases, via the harmful use of mercury used to extract gold (and most recently COVID-19), water pollution, poor health and safety, and child labour impoverishing the communities and destroying their very livelihoods. It is clear this is a crucial moment for environmental protection and the protection of the local population against unscrupulous political and traditional authorities whose interest is parochial” he underscored.

Mr Andrews Addoquaye Tagoe, Deputy General Secretary, National Secretariat, Hall of Trade Union called on the ministry of health and its stakeholders to carry out health screening exercise on the members of the affected communities.

“What is happening now is not just a destruction of today but tomorrow, our water bodies are contaminated due to the poisonous substance use in illegal mining, I will like to call on the ministry of health to begin testing people in those communities before it’s too late”, he said.

On his part, Owusu Kofi Elijah, Farmer, Member of the Juaboso Landscape Management Board said the issue is very worrisome which government must put more efforts to fight it once and for all.

“Before you sleep and wake up the following day, your farmland is gone, our farmlands are encroach day by day. Our farm products are spoiling all because the water we use is contaminated. We have only one ghana and we are ready to help the government win this fight”.

The group, therefore, called on the government to taken below four key points into action while fighting with menace galamsey in the country:

(1)    We want the government to implement policies and budget that respect and invest in community actions and rights, ensuring that the little gains in our hard-fought efforts do not go to waste.

(2)    We want the government to be aware that fighting illegal galamsey is a collective action, but planning will fail when community members are continuously excluded when communication is distorted by government and powerful interest groups, and when government fail to show leadership and action

(3)    We want the government to demonstrate that indeed no subject or person is above the law. Government should bring all known politicians, traditional authorities, policymakers, businesswomen and men and influential people involved in the business of illegal mining to scrutiny and prosecution.

(4)    The communities and civil society groups will play their part, but we urge all other stakeholders, particularly government, traditional authority, and politicians to play their roles and live up to expectation.