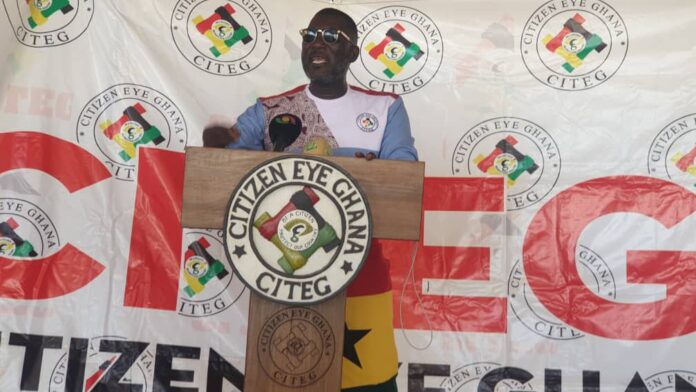 President of Citizens Eye Ghana (CITEG Ghana), a member of the ruling New Patriotic Party(NPP), Mr. Alex  Kwaku Tetteh, has appealed to the general public for pardon over his banter with the General Secretary of the NPP, John Boadu.

His apology comes a day after a clash between him (Mr. Alex Kwaku Tetteh) and the NPP General Secretary(John Boadu) upon alleging some NPP big wings and appointees of the President, Nana Akufo Addo, were involved in the galamsey menace on live on Net 2.

The said allegation was accompanied by name-calling resulting in an exchange of unprintable words between the two, which incident Mr. Tetteh felt was a bit below the belt.

“Upon a sober reflection, I felt we should not have done that so am appealing to all my fans and the nation at large to pardon me”, he pleaded.

“I am sorry for the unfortunate incident and also promise my followers and the general public to forgive me. The nation-building agenda is one that hurt but the mature thing to do is to apologise”, he reiterated.

But while apologising for the unfortunate incident, he maintained his unflinching support for the President’s cause to fight the galamsey menace.

In another news, the Communication Officer with Citizen Eye Ghana, Appiah Shadrach believes that the ruling on the Rastafarian students by the court should bring finality to the impasse.

While urging the Achimota School to accept the ruling by the court, he also wants to bring the attention of the two Rastafarian students and their families that any society without rules and regulations suffers disorderliness therefore that they at least for the next three years abide by the school rules to foster progress.