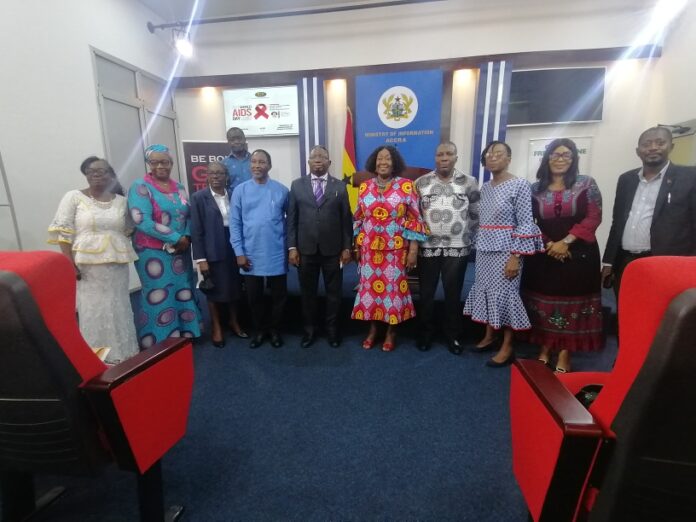 Stakeholders in health have emphasised the need for the government to aim at resilience and sustainable structures to end pandemics in the country.

At the launch of this year’s World AIDS Day in Accra, they bemoaned the adversities of pandemics which in their estimation have become a threat to public health as well as the national economy.

According to the Ghana AIDS Commission, in spite of the increasing uptake of prevention, treatment, and care services with the declining trends in new HIV and AIDS infections and death, the disease is still a major public health challenge in the country.

The Commission says Ashanti Region now has the highest number of AIDS infections with a figure of 73,245.

Director-General of the Commission, Stephen Kyeremeh Atuahene, said though policies and strategies have been put in place, stakeholders must work collectively to scale-up education to reduce new infections.

“Regions, where we have high population with sex workers and men who have sex with men, tend to have high infection. COVID-19 has overshadowed HIV because at the early stages of the HIV epidemic, HIV information was all over the place, the government was actively leading the fight, which means HIV should not be relegated to the background. That is why we want to use the occasion of the World Aids Day campaign to really intensify education and mobilize Ghanaian society to get involved,” Dr. Atuahene said.

The Presidential Advisor on HIV/AIDS, Dr. Mokowah Blay Adu Gyamfi, said plans are underway to establish an HIV fund to cater for persons with the disease.

“Is our turn to stand in for posterity, to end inequalities, AIDS and pandemics. To achieve this, we have invested considerable resources to ensure that most, if not all, districts have at least one anti retroviral treatment site. In furtherance of our national response, we are advancing plans to establish an HIV fund and to develop SOPs for different populations including high risk youth,” Dr. Adu Gyamfi noted.

Chairperson for the launch who is also the MCE for Adentan, Daniel Alexander Nii-Noi Adumuah, asked Ghanaians not to focus only on the COVID-19 pandemic but also work together to accelerate efforts towards achieving the ‪95-95-95‬ fast track targets by 2025.

“We were told that 85% of the new infections are girls and I think that is really staggering. Corona has taken a lot of the space, and we realize that we tend to forget some of the things that are already in the system. I recall in the 80s when HIV became the most prominent thing, everybody was concerned about it but today if you talk to people they say is it really there? With all these things, there is still the need for us to do a lot of advocacy,” Mr Nii-Noi Adumuah indicated.

The Programme Manager, National AIDS/STI Control Programme (NACP), Dr Stephen Ayisi Addo who represented the Ghana Health Service, said the new statistics on HIV!/AIDS indicates that there is still more to be done to end the pandemic.

Country Director UNAIDS, Angela Trenton-Mbonde pledged her organization’s support to help fight HIV/AIDS in the country. She, therefore, entreated all and sundry to be involved in the fight.

The theme for this year’s celebration is End inequalities, End AIDS, End pandemics.