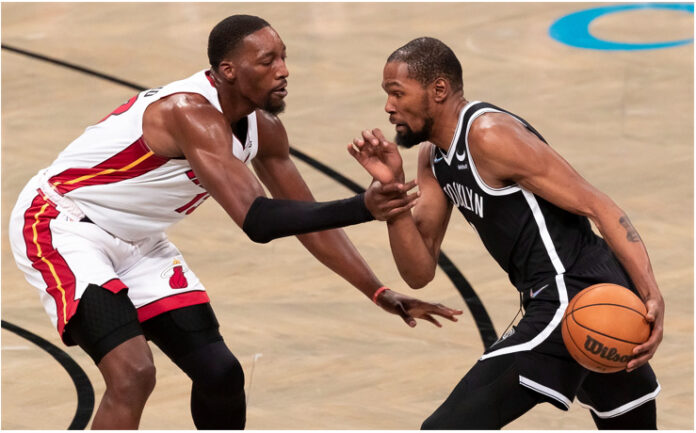 One of the NBA’s top players, Bam Adebayo, was recently honoured by his team, the Miami Heat, for his achievement of having won an Olympic Gold Medal. The 24-year-old, who was born in New Jersey to an African-American mother and a Nigerian father, helped the United States Men’s Basketball team claim the top honour at the 2020 Olympic Games earlier this year.

Ironically, Adebayo could have represented Nigeria at the Tokyo Olympics, as he was eligible to play for the West African country, though ultimately he chose to play for the country of his birth… and went on to help the U.S. secure yet more Olympic glory in basketball.

The Heat hang banners in their FTX Arena in Miami to commemorate when members of the team win Olympic Gold Medals, and Adebayo’s was recently unveiled in a ceremony at halftime of Miami’s game against the Charlotte Hornets.

His is the fifth now swaying from the rafters, joining ones paying tribute to Olympic successes by Alonzo Mourning, Tim Hardaway, Dwyane Wade and LeBron James. Current Heat players Jimmy Butler and Kyle Lowry have also won Gold, but did not do so while on Miami’s books and therefore do not have their own banners.

“It was an incredible accomplishment,” Heat coach Erik Spoelstra said of Adebayo being part of the Gold-winning team. “Thinking about where he’s come from and his journey to get to that point, to be in a position to help the U.S. Olympic team win a gold, that’s really amazing.”

Adebayo had six points, six rebounds and four assists in the Gold Medal win over France, a victory where the Americans avenged a loss to open the Olympics. “He was a joy in every way,” U.S. national team coach Gregg Popovich said of having Adebayo on the Olympic team.

“Bam’s a student of the game, but also of Miami Heat history,” Spoelstra added. “He’s seen the banners go up. That means something to him.”

Indeed it does, as explained by the player himself: “That’s motivation: to get my name in the rafters again.”

But before Adebayo can dream of further Olympic or World Cup success with the U.S., he’ll need all his skill and determination to help the Miami Heat challenge for top honours in the ongoing 2021-22 NBA season, with ESPN and ESPN 2 featuring no less than three live games this week.

Catch the following NBA games live this week on ESPN: