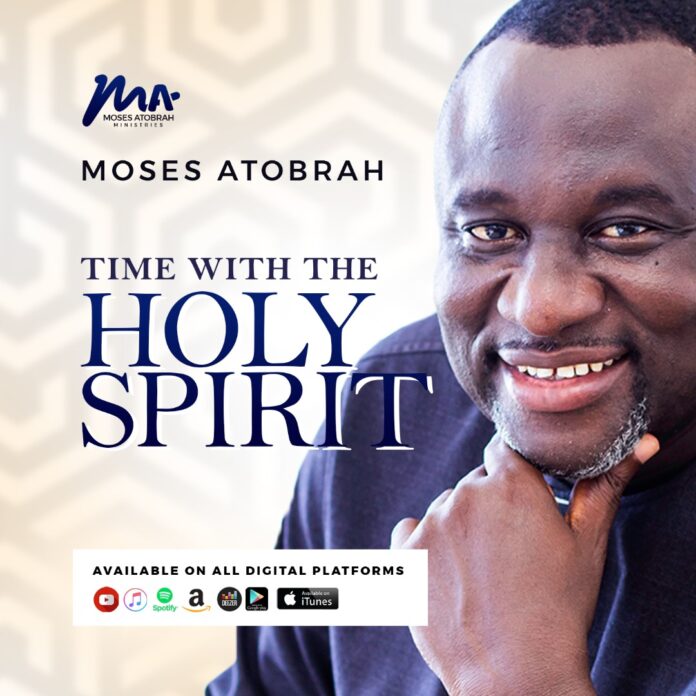 Moses Atobrah is a colossus breed of the gospel music industry in Ghana, who has written and recorded about 56 songs out of which three albums were released so far to his credit.

Many remember him for the 90s hit worship song “Honhom Krokron Yehia Wo” to wit “We Need You Holy Spirit.”

The good news for gospel music fanatics is that Moses Atobrah has once again bounced back to the music scene.

This time around, with a new album mix comprising timeless worship songs which form part of his main touching prayerful melodies.

The new album is expected to be launched on 28th February 2022.

The new release is dubbed ‘YE BE YI W’AYE’. It was produced and arranged by Joseph Amoah of Springboard Studios.

All along, his desire and focus was never on gospel music but instead wanted to become a well-endowed marketing person to promote something or some brand.

In an interview on Accra-based Joy FM on Sunday with the Host of ‘The Reason Is Jesus’, Fiifi Folson, Minister Moses Atobrah revealed on Up Close a segment of the show that his maiden gospel ‘Honhom Krokron’ hit came right from the throne room of grace.

“I think I received this song on the campus of IPS now UPSA about 26, 27 years ago so I did the recording and exactly 25 years ago I released an album when I was in my final year. It was a whole album that was released. The Title Track of that Album was ‘Twe B3n No’ to wit ‘Draw Close to God.’”

He added “the real driving force receiving that first song, was as a result of a broken relationship I had at the time. I never knew I had that gift of writing songs. I was just there alone and this song dropped. The song meant draw close to God and give your heart to him. I recall that broken heart, I was full of pain. So I realized I had the gift and then subsequently the songs kept coming.”

He further revealed that he used to pray in the bush between IPS and PRESEC so the first hit was one of the songs that God graciously gave him during those prayer hours.

“When it comes to how I started my music, I want to thank God for this blessing simply because it is a family thing. I have uncles like Nana Nkrumah who handles the Nsroma Talent Project; also JB Andrews who we lost recently who was the Music Director for the whole Methodist Church Ghana;

I also learned my grandfather was a pianist, organist for the Methodist Church. And I must say from the whole family we sing; we usually gather around myself and my siblings to sing and harmonise together so music is in the family,” he said.

Moses when asked how he begun producing his songs had this to share:

“I was on campus and these songs kept coming at the time I was also the vice-president of Gafex, I felt let me rally some of the talents around me. One Rev. Minister of Lighthouse Chapel Bishop Solomon Boateng, a very good keyboardist, and then we had one Osorohene so we mobilized and started working on some of my songs. Then I contacted Zap Mallet who transformed everything into a masterpiece and produced my first work.”

Interestingly, here was I discovering my own gift I could promote but trust me the frustration was a lot. Piracy was rife, also, producers won’t offer any help due to past experiences of ingratitude on the part of some already made music artistes so it was very difficult breaking through.

From his experiences, what made him sad the most was where men of God and pastors with big churches commanding large numbers sidelined musicians at that time.

According to him, it was a nice way of frustrating them from using their bigger stages as a platform to blow.

Moses Atobrah is a married man with three children.

He is currently a Council Member of the Ghana National Chamber of Commerce and Industry. He is an entrepreneur behind huge brands like Debbies and Debbies Tone African Herbal range of organic products.