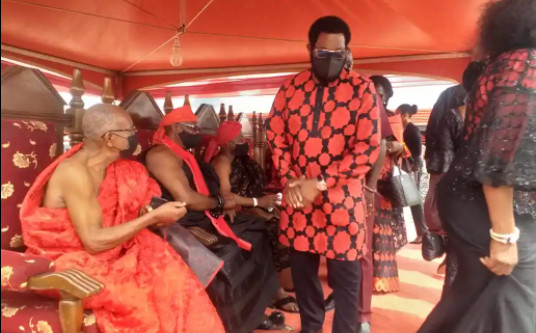 Funeral rites and a burial ceremony has been held for the late La Mantse and Paramount Chief of the La Traditional area Nii Dr. Kpobi Tettey Tsuru. Nii Tettey Tsuru who reigned for 32-years died 3 years ago at age 89.

He has been lying in state since Wednesday, March 16, 2022, for public and government officials to file past and bid him farewell.

In a tribute at the burial service held on Friday, March 18, 2022, Widow, Mrs. Doris Darkowaa Kpobi described her late husband as ”humble and affectionate.”

Children of the late Mantse also shared fond memories of their father, saying he was a ”loving father”.

President Akufo-Addo led a government delegation to file past his remains on March 17, 2022.

He donated assorted items, including boxes of hard, soft, and traditional drinks, and cash of GHC50,000 to the La Traditional Council towards the burial.

Former President John Mahama, NDC General Secretary, Asiedu Nketia were among some of the dignitaries who paid last respects to the Late La Mantse.

ALSO READ  John Mahama won't testify in court
AMA GHANA is not responsible for the reportage or opinions of contributors published on the website.