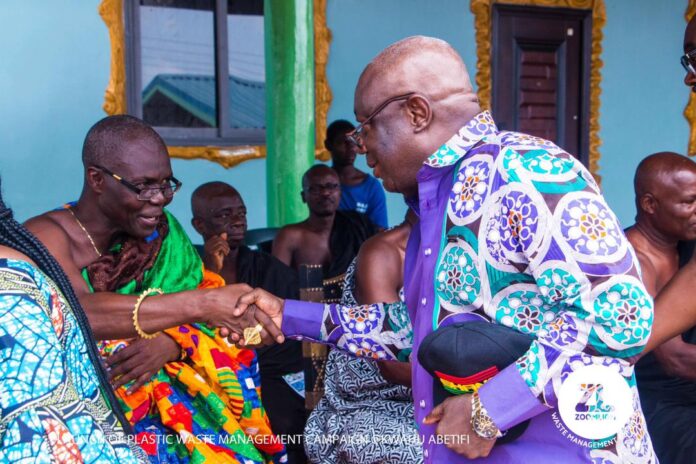 A campaign christened Plastic is a Resource not Waste aimed at managing plastic waste during this year’s Easter festivities in the Kwahu Ridge and the Eastern Region as a whole has been launched.

The plastic waste management campaign is an initiative of the Ministry of Environment, Science, Technology and Innovation (MESTI) in collaboration with the Ministry of Local Government, Decentralisation and Rural Development (MLGDRD) through the Kwahu East District Assembly (KEDA) and Kwahu South Municipal Assembly (KSMA).

Waste management company, Zoomlion Ghana Limited, is actively involved and supporting with about 300 dustbins and other waste management logistics including personnel, all in an effort to ensure that the Easter festivities are marked in a clean and healthy environment.

Launching the campaign at the forecourt of the Abetifi Chief’s Palace in Abetifi in the Eastern Region on Tuesday, April 5, 2022, the Minister of Environment, Science, Technology and Innovation, Dr. Kwaku Afriyie, said ahead of the Easter festivities on the Kwahu Ridge, it is expected that huge volumes of plastic waste would be generated during the period.

“And it is for that reason that I humbly implore all – religious bodies, schools, chiefs, event organisers, state and non-state actors, the private sector, and the media to put in place measures for plastics segregation and collection”, the minister charged

He decried the alarming rate of the plastic menace across the country, adding that it was regrettable that Ghana was sinking in a sea of plastics.

“From our roadsides, water bodies, parks, and drainage systems, the widespread littering and indiscriminate dumping of these plastics is causing serious risks to the environment and public health,” he bemoaned.

ALSO READ  Kumawood producers broke; they don't even give money when they attend funerals---Micheal Afranie laments

According to him, the situation was worse in the northern part of the country as plastics were littered all over the environment.

Even though Ghana has been applauded at the global level for its efforts in finding lasting solutions to her myriad of environmental problems, Dr. Afriyie underscored that the country continues to be saddled with major challenges, especially in plastic waste collection, and the management of thin plastics.

In this regard, he expressed his firm commitment to work with other ministers who are stakeholders in this campaign to achieve the sustainable management of plastics in the country.

He noted that most of the plastic waste generated end up in the rivers and drains down south of the country.

The minister, therefore, called on the people in the Eastern Region to help in the fight against the plastics pandemic.

He warned that the plastics menace has the potential to disrupt the country’s future development.

“However, I still see an opportunity for us as a country. Beyond the nuisance we call waste, I see a resource that has the potential to grow the economy and create jobs through a vibrant and market-driven domestic recycling industry,” he indicated.

However, he said this can be achieved when Ghanaians see waste as a resource that can be turned into useful products.

The action lifecycle of plastics, he contended, does not end when it is placed in the dustbin.

But, he said, recycling plastics helps produce a substantial difference.

Consequently, Dr. Afriyie called on the citizenry to stop thinking of plastic as waste, “but as a renewable resource that needed to be disposed correctly.

He admitted that the benefits of recycling plastics were enormous which range from building and construction materials to bags, fuel, as well as providing jobs for many Ghanaians.

Significantly, he said a circular economy for plastics offers a promising vision for stemming the tide of plastic waste, adding that converting this idea into a fully operational system will require greater cooperation from all key stakeholders.

The Ankobeahene of Abetifi, Nana Anim Dwumfuor II, who represented the Abetifihene/Kwahu Adontenhene, affirmed the support of the chiefs towards the success of the initiative.

He commended the minister for launching what he described as a ‘laudable initiative’ that will help stem the menace of plastic waste in the region.

He said it was sad that people did not see plastic waste as a killer.

He used the opportunity to appeal to the minister to ensure that logistics to facilitate and sustain the campaign were made available.

For his part, the Eastern Regional General Manager of Zoomlion Ghana Limited, Mr. George Aguadze, disclosed that during the festivities his company as a partner will be supporting the municipalities with 300 dustbins and compaction trucks among other logistics.

He explained that this was to ensure that plastic waste was effectively managed during the Easter celebrations.