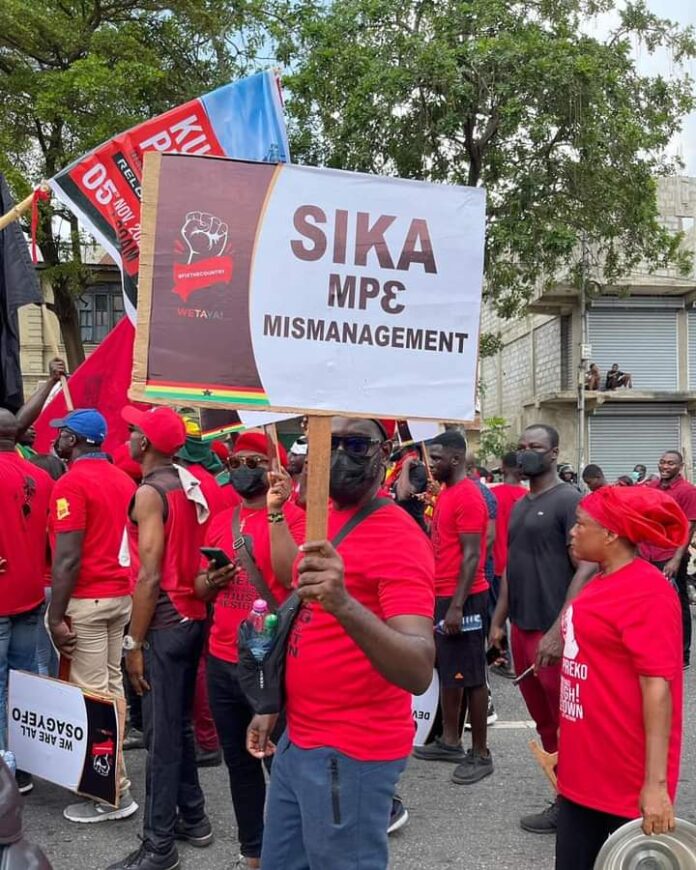 “President Akufo-Addo and his Vice President Dr. Mamadou Bawumia should take responsibility and resign from office,” Lawyer Martin Kpebu stated on Saturday, November 5th when he led the ‘Kume Preko reloaded’ demonstration that brought together over 500 protesters.

Addressing fellow demonstrators, Lawyer Martin Kpebu said it is clear to every Ghanaian the hardship we are facing in the country as a result of reckless borrowing and other forms of misgovernance by President Akufo-Addo which has led to the collapse of the cedi.

Saturday’s demonstration commenced around 7am at the Obra Spot Circle and climaxed at the Independence Square.

“This has never happened before, that every time a country borrows, the President and his family become richer. How?

“This can’t continue, the country doesn’t belong to President Akufo-Addo and his family and this calls for the President and the vice to resign based on article 35 of our constitution which ask for probity, accountability, etc. which are also repeated in the preamble of the constitution that citizens have the duty as stated in article 41 to ask the President to resign and this is not the first time a President has resigned in Ghana,” Lawyer Martin Kpebu told the media at the press conference.

The Private Legal Practitioner added, “General Ankrah resigned over a matter of 6,000 Ghana Cedis which was alleged he has used to bribe somebody organizing an opinion poll for him to be declared as the most popular person in Ghana.

“In article 60 clause 13 makes it clear that when a president and his Vice are gone, the Speaker of Parliament takes office for three which is used to organize a fresh election by the electoral commission to have a new President sworn in, and when such momentum event occurred, the International Community is often willing to help.”

Citing the high cost of commodities in the country, the Private Legal Practitioner insists that it is important for President Akufo-Addo and his Vice, Dr. Mahamudu Bawumia to leave office.