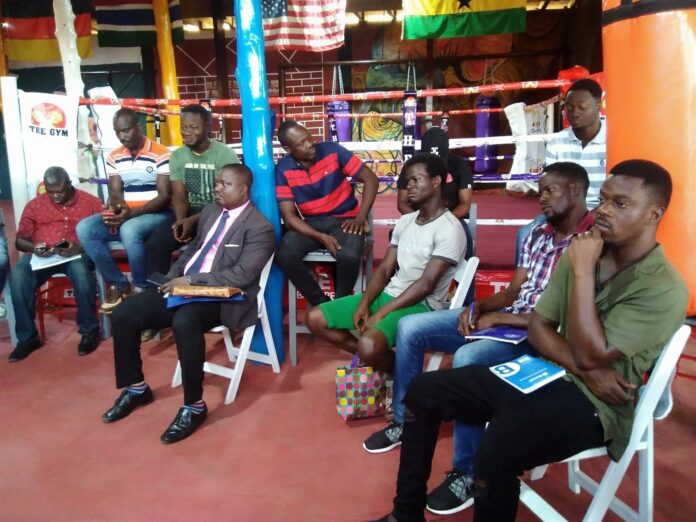 40 participants including one female have registered to attend the 2-day Referee /Judges Orientation course organized by the Ghana Boxing Authority (GBA) at The Gym in Accra.

Also present were Deputy Director of Promotions of the GBA, Mr. Michael Tetteh, and Deputy Technical Director, Percy Commey as well as GBA Board Member Carl Lokko, Mubarak Nanor aka America, a matchmaker and Coach Akai Nettey of Attoh Quarshie Gym were all present. Former President of the Ghana Boxing Federation, Mr. George Lamptey was also part of the course.

The participants were taught the rudiments of Professional Boxing, before the practicals. Boxers Holy Dorgbetor, Samuel Quaye, and Cann Neequaye demonstrated for the incoming new Referees and Judges.

Mr. J.A. Annan advised the upcoming referees/judges to prepare themselves well because becoming an official and standing in the middle of the ring to decide or determine the winner of a bout is not easy.

He expressed that the crowd alone can be intimidating and the official must always be fit, prepared, focused and have full concentration.

He said a referee must be neutral and consistent, have integrity and avoid arguments with the public.

World-class Referee, Roger Barnor said a referee must have command in the ring and know three basic things – Stop, Break and Box, which he orders the boxers.

He noted the types of boxers as the Classic, Puncher and Combination Boxer.

According to him the boxing scores come from Power punch, Effectiveness, and Aggressiveness which makes 75%, and Ring Generalship which is 25%.

He advised them to have a third eye which is his ears, stressing that the life of the boxer is paramount.

The Ghana Boxing Authority, President Abraham Kotei Neequaye expressed his gladness with the attendance but warned that those who are not smart may be sent out as the GBA expected 20 participants who are going to be taken through the real seminar. He urged them to learn hard by reading the rules and regulations that was provided to every participant.

He also urged them to be confident and very vigilant in the ring.

The course continues and ends on Friday, December 2.